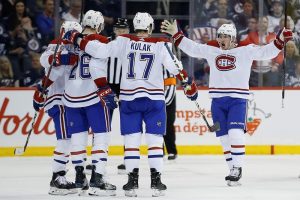 WINNIPEG — Shea Weber knows the Montreal Canadiens have a lot of fight left in them.

They showed that Saturday night by beating the Winnipeg Jets 3-1 to remain relevant in the race for a playoff spot.

“We’ve talked about this the whole time. We’re not giving up,” Weber, the Canadiens captain, said. “We’re not out yet. Six more points available for us. We’ll take the next game here and try to win that one and see what happens.”

Joel Armia, Jeff Petry and Jordan Weal scored for Montreal (42-29-8), which is still tied with Columbus for the second and final wild-card spot in the Eastern Conference after the Blue Jackets defeated Nashville 5-2 on Saturday.

The Carolina Hurricanes sit one point ahead of the Blue Jackets and Canadiens for the first wild card. Carolina and Columbus have four games left, while Montreal has just three remaining.

Carey Price made 23 saves for the Habs and praised his teammates for bouncing back after a 6-2 loss to Columbus on Thursday.

“Right from the get-go, I thought that could have been one of our better games all season,” Price said.

Mathieu Perreault got the lone goal for Winnipeg (45-29-4), which has lost three in a row. The Jets and Predators are tied for top spot in the Central Division, with Winnipeg having a game in hand.

“Ever since we’ve clinched (a playoff spot), it seems like we’re taking it a little bit more lightly, which we shouldn’t,” Perrault said. “I don’t really know how to explain that, it’s just maybe human nature, you know.

“You feel maybe a bit more comfortable knowing you are going to make the playoffs, so you don’t have to try as hard. I’m sure when playoffs come around, we’ll get back to our game.”

Connor Hellebuyck made 41 saves for Winnipeg.

Captain Blake Wheeler was asked if the Jets have to play with a desperate edge to get out of the slump.

“Well, we’re trying to win a Central Division,” Wheeler replied. “You know, it might come as a surprise but those guys get paid, too. They’re NHL players.

“So as bad as we want to blow everyone out of our building and beat them 5-0, it’s not reality sometimes. You know, it’s not easy for us right now. Facing some adversity right now. We’re going to be a better team once we get through it.

Montreal controlled the play in the first period of Winnipeg’s final home game of the regular season, outshooting the Jets 16-5 and grabbing a 1-0 lead.

Armia scored on his former team eight seconds after Jets forward Nikolaj Ehlers went to the penalty box for tripping at 16:57.

The second period featured near misses by the Jets and another goal for the Canadiens.

Montreal had a second power play eight minutes into the second period with Dmitry Kulikov in the box for tripping, but defenceman Ben Chiarot blocked two shots and Hellebuyck stopped Armia from in close.

Jets defenceman Dustin Byfuglien, returning to action after missing the past 19 games with an ankle injury, hit the post late in the second and forward Kevin Hayes fired a shot that banged into the crossbar instead of the open net.

Petry made it 2-0 with 37 seconds left in the second with a blast from the point. Max Domi’s assist gave him 70 points on the season, making him the first Canadiens player to reach that mark since Tomas Plekanec in 2009-10.

The Canadiens upped their shots advantage to 29-13 after the middle frame.

Montreal got its third power play of the game early in the third when Wheeler was called for slashing, but Hellebuyck didn’t let the Habs pad their lead.

Perreault scored his 15th goal of the season with 8:36 remaining after he got a loose puck on his stick in the slot and fired it past Price.

Weal put the puck into the empty net with 16 seconds left and had an earlier assist.