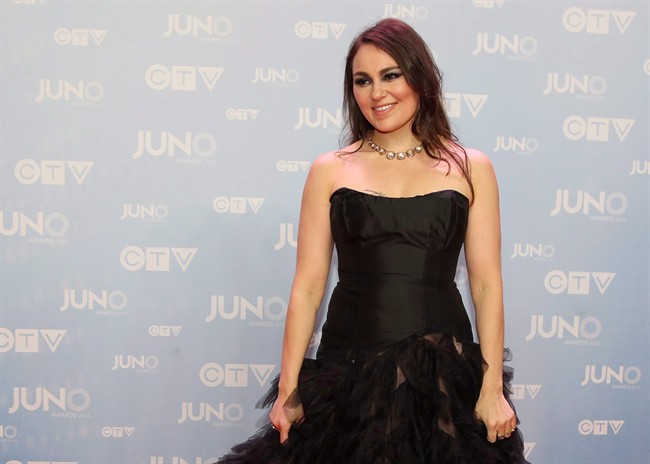 Tanya Tagaq poses on the red carpet during the 2015 Juno Awards in Hamilton, Ont., on Sunday, March 15, 2015. Award-winning Canadian singer Tagaq is one of the artists boycotting the Indigenous Music Awards this year. (THE CANADIAN PRESS/Peter Power)

Several artists are pulling support for the Indigenous Music Awards over concerns about cultural appropriation of Inuit throat singing.

Tanya Tagaq, Kelly Fraser and Iva are among the musicians who posted to social media pledging not to participate in the awards until the organization revises its policies or includes Inuit representation on its board.

The throat-singing duo PIQSIQ, comprised of Inuksuk Mackay and Tiffany Ayalik, announced on Twitter Monday they are withdrawing the nomination of “Altering The Timeline” for best electronic music album.

The Yellowknife-raised sisters said in an interview their decision was spurred by the IMA’s nomination of a non-Inuit artist who performs throat singing, which they view as an “insensitive” appropriation of their culture.

Mackay and Ayalik declined to name the musician at the centre of the controversy, saying they wanted to focus on the broader issue of appropriation between Indigenous groups.

“In cultural practices like throat singing, which were just about extinct and are now in a creative reclamation, there’s so much context that’s lost if it’s appropriated rather than collaborated with,” Mackay said by phone from Sudbury, Ont.

Mackay and Ayalik said they and other members of the throat-singing community worked “quietly” in recent weeks to resolve the issue with the artist and IMAs, but have yet to see any action.

A spokesman for the IMAs did not provide comment Monday.

Ayalik emphasized that there are vast variations between Indigenous cultures, even in communities as close as 50 kilometres apart, and each deserves to be respected.

“We aren’t all one big group; and just as distinct as Scottish culture is from Norwegian culture, we’re just as different between Indigenous groups.”

As disappointed as they are to be pulling out of the awards, Mackay and Ayalik said they hope to resume their relationship with the IMAs once policies are put in place to acknowledge these cultural distinctions, such as ensuring Inuit representatives are involved at every step of the event’s organization.

“We are light in our hearts knowing that what we’re doing is going to help make people understand the various beautiful differences across cultures, and that people can also listen and look at Indigenous music with a bit of a different lens and focus,” Ayalik said by phone from Vancouver.

“When we draw on those experiences that are true and authentic to us, there’s really nothing we can’t do.”

The awards ceremony is set to be held in Winnipeg on May 17 as part of the annual Manito Ahbee Festival.