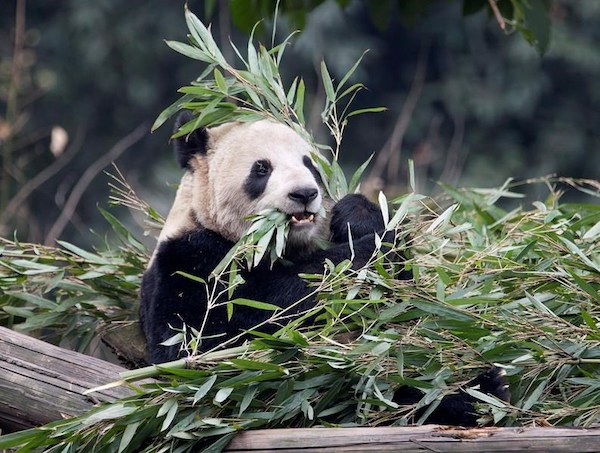 Panda Er Shun eats bamboo at the Panda House at the Chongqing Zoo in Chongqing, China on February 11, 2012. Officials at the Calgary Zoo say they’ve moved ahead with the process to add more pandas to the facility’s population, announcing that Er Shun was artificially inseminated on Tuesday. (THE CANADIAN PRESS/Adrian Wyld)

CALGARY — The Calgary Zoo is hoping for a furry bundle of joy in about four months after artificially inseminating its female giant panda earlier this week.

Officials say keepers noted that Er Shun had entered the preliminary stages of her breeding cycle, so veterinarians inseminated her on Tuesday with sperm provided by the Chinese government.

Animal care and veterinary teams, along with reproductive specialists from China, had been monitoring the panda’s hormone levels since last month.

Er Shun is now resting in her custom den in the zoo’s Panda Passage, where she is receiving special care.

It won’t be known for some time if she is pregnant since pandas experience delayed implantation in the uterus.

Experts say it’s difficult for pandas to get pregnant because they only ovulate for three days out of the year.

Er Shun gave birth to two cubs in October 2015 when she was at the Toronto Zoo.

She and her offspring, as well as their biological father, were relocated to the Calgary Zoo last March.

The pandas are on loan from China as part of a 10-year-agreement between the two zoos and the Chinese government.

The zoo says there are fewer than 1,800 giant pandas left in the wild.