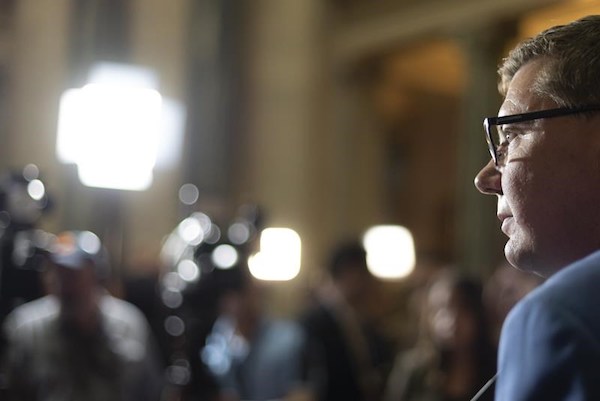 Saskatchewan Premier Scott Moe speaks to media in the rotunda during budget day at Legislative Building in Regina on Wednesday, March 20, 2019. (THE CANADIAN PRESS/Michael Bell)

REGINA — Saskatchewan Premier Scott Moe says he welcomes Manitoba in the legal fight against Ottawa over the federal carbon tax.

Moe told about 1,500 people at a Regina rally opposing the tax that Saskatchewan is making a difference by leading the battle.

Manitoba announced Wednesday that it is following Saskatchewan and Ontario in challenging the tax in court.

Ottawa started imposing its own tax Monday on the three provinces, along with New Brunswick, because they refused to enact their own carbon levies.

“One year ago, it was Saskatchewan alone. Now it’s Saskatchewan and New Brunswick and Ontario and Manitoba. And very shortly it could be Alberta,” Moe said Thursday.

Alberta’s United Conservative Party Leader Jason Kenney has said that if he were to win the province’s April 16 election, he would axe its carbon tax and file a court challenge on the federal levy.

Most of the people who attended the rally at a convention centre arrived in a large convoy of about 700 honking trucks from parts of rural Saskatchewan.

The Opposition NDP had earlier criticized Moe for planning to attend the event, because one of its organizers doesn’t believe climate change poses a threat to the planet.

Jason LeBlanc, a farmer from southern Saskatchewan, helped organize the rally after he travelled to Ottawa with a convoy of pro-energy industry supporters earlier this year. He calls himself a “climate-change doomsday denier.”

Moe told the rally that climate change is real and human activity contributes to it, but a carbon tax is not the solution.

“What we don’t accept is a federal government imposing this on our industries, on our provinces and our families across the nation.”

The crowd cheered when speakers on stage said it was time to boot Liberal Prime Minister Justin Trudeau and his government from office.

“Getting rid of the Liberals will get rid of the carbon tax. We’ve said it and we will stand by it,” said Robert Kitchen, a Conservative MP for Souris-Moose Mountain in southeastern Saskatchewan.

Larry Olson drove to the rally with a convoy from Estevan, Sask., and said he’s worked in the coal industry for 41 years.

Olson said he believes the federal government is trying to shut down the sector.

He said while he is close to retiring, some of his younger colleagues are nervous for their jobs.

“The future doesn’t look good. I feel bad. It’s given me a good life, given me an awesome life and I’d like to see other people make a living at the same industry I did.”