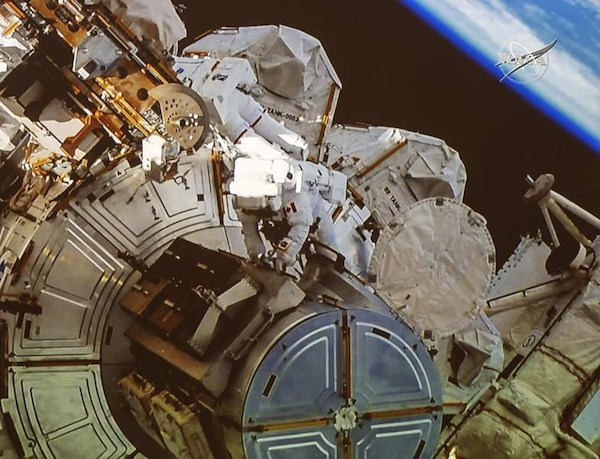 Canadian astronaut David Saint-Jacques takes part in a spacewalk as seen in the livefeed from the Canadian Space Agency headquarters Monday, April 8, 2019 in St. Hubert, Que. (THE CANADIAN PRESS/Ryan Remiorz)

After re-entering the space station, he hailed the mission as “a glimpse of the future as we venture further into space.” He said the international effort was an excellent example of collaboration.

“Because when we manage to look beyond our differences, we achieve things that seem impossible,” said Saint-Jacques, the first Canadian to perform a spacewalk since 2007. “That’s how we progress.”

During the spacewalk, Saint-Jacques reported that McClain’s voice was faint at times. The problem worsened as their excursion drew to a close.

“We know that it’s a lot of hard work and a lot of big sighs of relief as soon as this hatch gets closed,” McClain said once the pair were inside the airlock.

Within moments, the spacewalkers could barely hear their colleagues over the radio loop. They had to shout and repeat words at times, as did the astronauts on the other side of the hatch.

McClain, meanwhile, reported having a thin layer of moisture inside her helmet. The change to her visor was noticeable in the last 15 minutes of the spacewalk, she noted.

NASA is wary about moisture inside helmets ever since an Italian astronaut almost drowned during a spacewalk nearly six years ago because of a water leak in his suit. McClain insisted she wasn’t wet, and that the moisture was minimal. A crewmate later noted perspiration.

Saint-Jacques and McClain began the spacewalk half-an-hour earlier than scheduled.

Retired astronaut Dave Williams said astronauts prefer to have a cushion against the unpredictability of working in space. “We like to get ahead on the timeline and stay ahead, because you never know what’s going to happen during a spacewalk,” Williams said at the Canadian Space Agency headquarters in suburban Montreal.

Williams holds the Canadian record for the most spacewalks, with three for a total of just under 18 hours outside the space station during a 2007 mission. Those came at a time when there was extensive building going on at the station.

Now, astronauts are transitioning mostly to maintenance tasks, which partly explains the long gap since the last Canadian spacewalk by Williams. The other two Canadian astronauts to have performed the feat are Steve MacLean in 2006 and Chris Hadfield in 2001. Saint-Jacques is on his first posting to the space station, which began on Dec. 3.

The tasks took the pair all over the station and included relocating a battery adaptor plate, upgrading the station’s wireless communication system and connecting jumper cables along the midpoint of the station’s main truss to give Canadarm2 an alternative power source.

Canadarm2 is a sort of robotic hand that is crucial to maintaining the space station, and the new cables allow the arm to make repairs in case of an outage without requiring a spacewalk.

Williams, who spoke to Saint-Jacques on Saturday, said his countryman was very excited about the mission and proud to wear the Canadian flag, but laser-focused on the tasks ahead.

It was the third spacewalk in just under three weeks for space station occupants, and much of the work involves replacing batteries on the 19-year-old outpost with fresh ones that arrived in December. Canadian Space Agency robotics flight controllers were providing support to the astronauts from mission control in Houston.

With the manual tasks complete, Canada’s robotic contributions to the station will finish installing new lithium ion batteries. “We’ll be able to come down with Canadarm2 and Dextre at the tip and robotically finish moving those batteries around,” Ken Podwalski, the CSA’s space station program manager, said.

Williams said the astronauts’ seemingly lumbering pace is necessary to maintain control. “David’s doing an incredible job, moving very gracefully, using just fingertip forces to go from one place to another on the space station,” Williams said. “That’s the mark of a highly experienced spacewalker, already.”

The astronauts returned inside just before 2 p.m. EDT, likely exhausted from several physically demanding hours with no food and just one litre of water in a suit pouch.

Williams noted that astronauts spend years training, getting into shape and training underwater to mimic the choreography. “Quite literally, it’s years of training for hours of spacewalking, but it’s quite an experience getting to do it,” he said.

Saint-Jacques, McClain and Oleg Kononenko of the Russian space agency, Roscosmos are scheduled to return to Earth in June.

← Previous: Eight Charged After RCMP Seize Weapons, Drugs in Oakbank Next: Manitoba Premier Says He Plans to Give Opponents a Heads-Up Before Any Election →
Tags: Canada