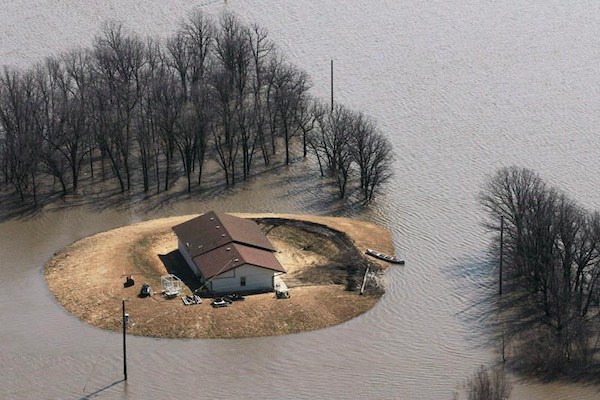 A house just north of Morris, Man. is isolated by floodwater on Tuesday, April 14, 2009. (THE CANADIAN PRESS/John Woods)

WINNIPEG — The cooler temperatures and lack of recent precipitation have eased the flood threat along the Red River in Manitoba.

The province is now predicting river levels to be equal or slightly lower than 2011 flood level. The previous forecast, as recent as late last month, had forecasters calling for water levels at or slightly higher than those seen in 2009.

Officials expect the Red River Floodway to be operated between April 12-14, while crews have been deployed to communities in the Red River Valley to prepare for potential ring dike closures.

A partial ring dike closure is currently underway at Emerson but the community remains accessible by road. The crest of the Red River is expected in Emerson between April 16-19, and Winnipeg between April 20-23.

Water levels have peaked in most locations on the Assiniboine, Qu’Appelle and the Souris rivers. In Winnipeg, the Assiniboine River Walk from the Osborne Bridge to the Main Street Bridge is temporarily closed due to overland flooding. Barriers are in place for pedestrian safety and the public is asked to avoid the area.

The city is now planning use a peak of 19.6 feet at the James Avenue gauge as opposed to 20.5 feet. River levels are expected to crest over Easter long weekend.

Of the 123 properties previously identified by the city as being at risk, only 18 of them are now considered to potentially require sandbag dikes.

The city has started to deliver sandbags to at-risk properties, and notices are being delivered to homes that are no longer at risk. A clay dike is being built at one location, instead of using sandbags.

Volunteers aren’t being sought at this time, officials say.