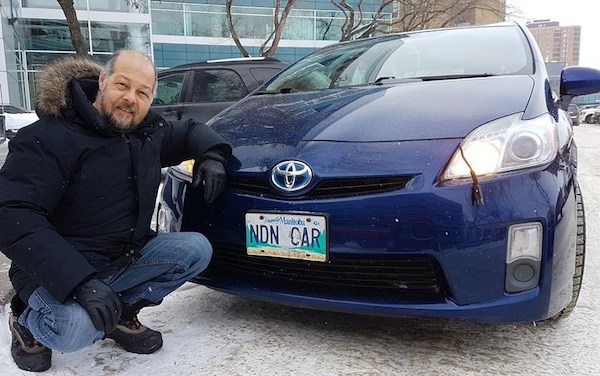 Bruce Spence poses beside his car in this undated handout photo. (THE CANADIAN PRESS/HO – Colleen Simard)

WINNIPEG — Bruce Spence is used to driving around Manitoba and seeing people pointing at his personalized NDN CAR licence plate, honking their horns, giving him a thumbs up and bursting out laughing.

That why the Nehiyaw man from Opaskwayak Cree Nation said he was shocked to find out Manitoba Public Insurance had revoked the plate, which honours “Indian Cars,” one of his favourite songs.

“I just don’t think that a provincial government or Crown corporation should be able to walk all over an Indigenous person,” Spence said.

“I’ve been living under the jackboots of Canadian government my entire life. This is a small issue, it’s a domestic issue, it’s a provincial issue, but I think it’s an issue worth fighting.”

Licence plates in Manitoba belong to MPI and the agency has said it can recall or deny them for a variety of reasons, including if they are offensive, suggestive, discriminatory or include racial or ethnic slang.

Spence, who is a producer with Aboriginal Peoples Television Network, was issued the plate about seven years ago.

Spence laughed explaining how the song is about a man who is trying to make it to the next powwow down the road.

“He’s got a crappy car and it’s funny and it has a good beat and you can dance to it,” Spence said. “I made an inquiry and the plate was available, so I applied for it.”

There were no problems until May 2018 when Spence said he received a call from MPI claiming the plate was offensive and “ethnic slang.” He wrote the minister asking for an explanation.

Months went by without a response. Then in February, Spence said the insurer told him his plate was being revoked because it had been identified during a review as possibly offensive.

“I was afraid that MPI would just as arbitrarily suspend my insurance if I did not comply with their demand,” he said.

Soon after, Spence was contacted by the Justice Centre for Constitutional Freedoms offering to fight MPI’s decision.

It is the same group that is representing a Manitoba “Star Trek” fan, Nick Troller, who is fighting in court to keep his personalized ASIMIL8 licence plate, which was recalled in 2017.

Assimilate is a well-known saying by the alien race the Borg on the show, but the insurer said it had received a complaint that it was offensive to Indigenous people.

A Justice Centre lawyer argued in a Winnipeg court earlier this week the insurer’s “knee-jerk reaction” was a violation of Troller’s right to free expression.

Manitoba Justice lawyer Charles Murray countered that the word cannot be dissociated from the history of forced assimilation of Indigenous people in the province.

Spence said he understands there is a need for guidelines, but believes his plate was acceptable.

“My plate passed their sniff test seven years ago,” he said. “And now the plate is gone and I don’t know why. I’d like to know why, and I’d like to get that plate back.”

Personalized licence plates have been controversial before.

A man in Nova Scotia is also to be in court this month over a personalized licence plate. Lorne Grabher has been trying to reinstate his “GRABHER” plate since it was revoked in 2016 by the Registrar of Motor Vehicles following an anonymous complaint.

Saskatchewan Government Insurance recently denied Dave Assman (pronounced Oss-man) a licence plate with his last name on it. In response, he put a large “ASSMAN” decal on the back of his truck.