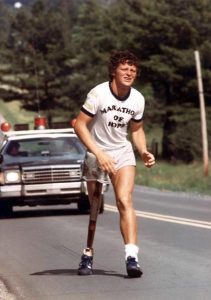 Marathon of Hope runner Terry Fox is shown in a 1981 file photo. (THE CANADIAN PRESS/CP)

ST. JOHN’S, N.L. — It is being touted as the “Team Canada of cancer research.”

Exactly 39 years after Terry Fox dipped his artificial leg in St. John’s harbour to begin his Marathon of Hope, the research institute that bears his name launched a new, national network that — for the first time — brings together Canada’s leading cancer hospitals and research universities.

The announcement Friday in St. John’s, at the spot where Fox started his run, also provided a poignant reminder that his ambitious bid to raise money for cancer research was barely noticed when it first began on April 12, 1980. But his gritty determination to run across Canada inspired a nation.

“Terry said the Marathon of Hope must continue without him and he would be very proud to see this happening in this highly collaborative and inspired way,” Darrell Fox, Terry’s younger brother, said in a statement.

“We are grateful to the millions of Canadians who have kept his dream alive and to the research and funding partners that are making this … network possible. You are bringing new hope to cancer patients.”

The Terry Fox Research Institute says the Marathon of Hope Cancer Centres network, which it describes as a “powerful collaborative platform,” will help accelerate so-called precision medicine for cancer patients.

The network will help close the gap between research in the lab and patient care in the clinic, the institute said.

Dr. Victor Ling, the institute’s president and scientific director, says this “Team Canada of cancer research” will apply new technologies, advanced imaging and artificial intelligence to ensure cancer patients across the country have access to the care they need.

Cancer research and care institutions in British Columbia, Ontario, Quebec, the Prairies and Atlantic Canada are expected to participate in the network.

The federal government will be spending up to $150 million over five years to support the network. The funding was announced in the March 19 federal budget.

The federal investment will be matched by the network partners, their foundations and the Terry Fox Foundation.

William Pristanski, chairman of the Terry Fox Foundation, said the network will bring researchers closer to achieving Terry Fox’s dream of a world without cancer.

“We are delighted with the federal government’s momentous decision to invest in world-class cancer research by collaborating with the Terry Fox Research Institute and the major cancer centres across Canada,” he said in a statement.

Under the guidance of the Terry Fox Foundation, the annual Terry Fox Run and other fundraising initiatives have raised more than $750 million for cancer research.