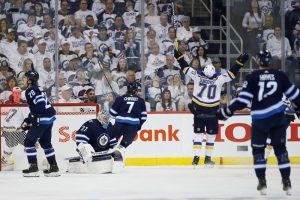 WINNIPEG — Oskar Sundqvist only had two shots on net Friday, but he made the most of them.

The St. Louis forward scored twice to propel the Blues to a 4-3 victory over the Winnipeg Jets in Game 2 of their Western Conference opening-round playoff series.

The Blues lead the best-of-seven matchup 2-0 and host Game 3 on Sunday.

“I was actually trying to go low blocker on the first one. I think it went under his arm,” Sundqvist said of Winnipeg netminder Connor Hellebuyck.

“The second one, I actually wanted five-hole and he kept standing up so it’s nice to see that one go in, too.”

Pat Maroon and Ryan O’Reilly, with the game-winner, also scored for St. Louis.

Rookie netminder Jordan Binnington made 26 saves for the visitors.

“It’s a hard barn to play in, but to take two is a really good sign for this team. But that doesn’t mean nothing, we’ve got to focus on Game 3 right now,” said Maroon.

Blake Wheeler and Mark Scheifele each had a goal and one assist for Winnipeg. Patrik Laine also scored and Dustin Byfuglien contributed a pair of assists.

“They haven’t won,” Hellebuyck said. “We’ve got a lot of heart in here and we’re going to fight. Every inch. Every battle.”

O’Reilly gave the Blues the 4-3 lead at 3:46 of the third when he used Jets defenceman Ben Chiarot as a screen to beat Hellebuyck on the blocker side. It was his first playoff goal since 2014 while he was with Colorado.

“I think lots of times you practise that (kind) of shooting through something,” O’Reilly said. “It’s obviously a great pass by (Jay Bouwmeester), kind of put me in there in a good spot and I’m just trying to get through on to the net.

“It was obviously a big play that was nice to have.”

The teams were tied 1-1 after the first period and 3-3 following the second.

The first and second periods featured good and bad times for Scheifele.

The Jets went on the power play 3:58 into the first period after O’Reilly was called for tripping, but Scheifele took an interference penalty 1:03 into the man advantage.

After Winnipeg defenceman Josh Morrissey bobbled the puck in the neutral zone, Sundqvist and Bouwmeester capitalized with a 2-on-1 and Sundqvist beat Hellebuyck at 5:23.

Scheifele was dinged for another interference penalty two minutes later and, then with 17 seconds remaining in the penalty kill, Jets forward Andrew Copp was sent to the box for cross-checking.

The Jets survived and Scheifele made up for it when he sent a pass from behind the net out to Wheeler for the captain’s goal at 12:01.

With Blues defenceman Robert Bortuzzo off for interference, Laine blasted a shot past Binnington for a 2-1 lead at 2:49 that sparked chants of “Go Jets Go.”

St. Louis quieted down the crowd by responding with goals by Maroon and Sundqvist by the 9:50 mark, but Scheifele stepped up with a power-play goal to tie it 3-3 with 1:05 left in the second.

“Both teams have played pretty well,” Jets defenceman Tyler Myers said. “It just hasn’t gone our way. We’ve got to outwork them in Game 3.”

The Blues held a 23-14 margin in shots on goal after two periods.

Bortuzzo went to the dressing with a bleeding wrist midway through the third period, but returned.