Home » Sports » For Assiniboia Downs, Escape Clause the Race of a Lifetime

For Assiniboia Downs, Escape Clause the Race of a Lifetime 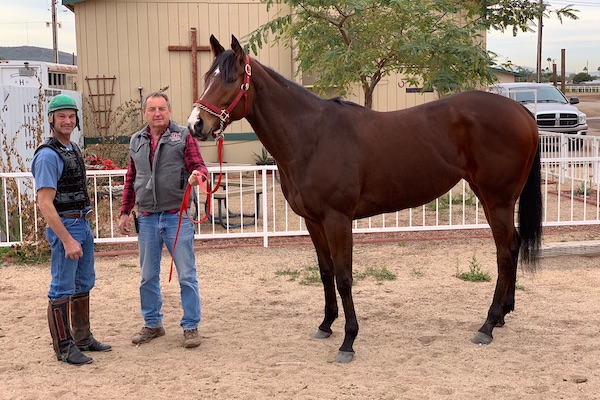 The queen of Manitoba racing and likely the province’s most outstanding athlete, Escape Clause, will find out on Sunday how good she really is.

The five-year-old bay mare out of Going Commando by Danger Pay, was bred in Manitoba by Cam Ziprick and Arnason Farms. She was purchased by owners Don Schnell, Barry Arnason and True North Racing in 2015 for $3,792 Cdn.

On Sunday afternoon at about 4:42 p.m., she will go to the post with some of the finest racing mares in North America in the $750,000 Grade 1 Apple Blossom Handicap at Oaklawn Park in Hot Springs, Ark. Should Escape Clause manage to win this race, she would almost double her career earnings of $495,500.

Escape Clause’s humble beginnings from a farm in tiny Russell, Man., to essentially a character in a movie, has endeared her to race fans all over the continent in the last six months.

No longer able to compete in stakes races with actual fields in Winnipeg, Escape Clause won three different stakes at the Downs last year against only one or two other competitors. At the end of the season, she headed to her winter home at Turf Paradis in Phoenix and started winning some big US races. Last November, she won the $75,000 Kathryn Crosby Stakes at De Mar near San Diego. This year, she won the $100,000 La Canada Stakes at Santa Anita outside Los Angeles and the $100,000 Harry Henson Stakes at Sunland in Albuquerque.

This weekend, however, she’ll race against the big guns.

Another horse to watch will be five-year-old mare Elate, ridden by Jose Ortiz and trained by Hall of Fame trainer Bill Mott. Elate has winnings of $1,470,325 in her career. She raced in the 2017 Breeder’s Cup Distaff.

Racing fans in Manitoba are hoping her best day will be this coming Sunday.

You can watch and wager on the race at Assiniboia Downs. If Escape Clause wins, the Downs will hold an extended Crazy Hour with beer, wine and shots at $2.95. As well, two races before the Apple Blossom Handicap, it will be the $150,000 Fifth Season Stakes at Oaklawn which will feature Gato Guapo, trained by a good friend of Manitoba racing, Robertino Diodoro. Gato Guapo, a Florida-bred, finished fourth in last year’s Manitoba Derby.