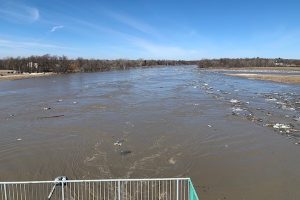 The viewing looking south from the deck of the Red River Floodway bridge on Sunday, April 14, 2019. (CHRISD.CA)

Officials said the measure isn’t expected to raise upstream water levels as it is an initial gate operation. Further movement of the gates will occur at 7 p.m.

When the gates are activated near St. Norbert, the floodway channel helps to divert water around the east side of Winnipeg. As part of its operation, the province has closed Courchaine Road from Turnbull Drive to Highway 200.

The forecast peak flow at the Red River Floodway is estimated to be between 19,000 and 24,300 cubic feet per second.

Forecasters are now expecting a flood of less than the 2011 magnitude for the Red River in Manitoba. The downgrade comes after the province analyzed the impacts of recent snow and rain in the North Dakota area of the Red River Valley.

The province says partial ring dike closures are currently underway at Emerson and St. Jean Baptiste, and the communities will remain accessible by road. Partial ring dike closures are expected at Morris, Letellier, Ste. Agathe and St. Adolphe. Based on the most recent forecast, there is a possibility the closure of Highway 75 north at Morris may not be necessary. Officials are watching water levels and forecasts, and will work toward keeping the highway open as long as it remains safe.

← Previous: Bystander Stops Suspect Who Appears in Video to Set Car on Fire with Fuel Next: Winnipeg Jets Bounce Back with 6-3 Win Over Blues →
Tags: Flooding | Manitoba | Red River