Government, Opposition Fighting Could Lead to Snap Election in Manitoba 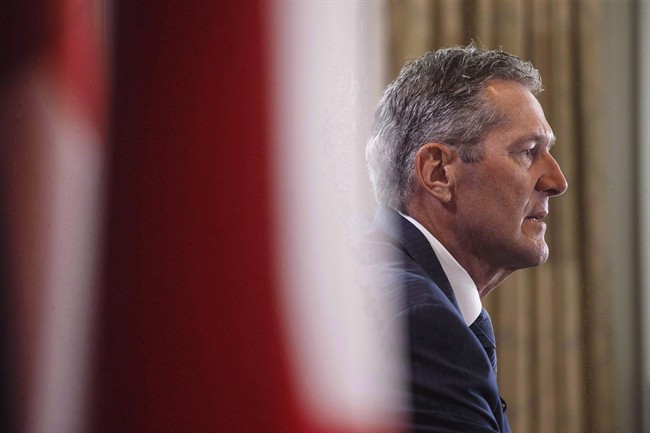 Manitoba Premier Brian Pallister speaks at a press conference during the Council of Federation meetings in Edmonton on July 18, 2017. (THE CANADIAN PRESS/Jason Franson)

WINNIPEG — There’s a game of chicken of sorts happening at the Manitoba legislature where a fight over a budget bill is creating uncertainty over a promised tax cut and raising the possibility of an early election.

Premier Brian Pallister’s Progressive Conservative government introduced an omnibus budget bill this spring that includes a cut to the provincial sales tax. It was promised by the Tories in the 2016 election campaign and would drop the PST to seven per cent from eight as of July 1.

Another section of the bill would eliminate a taxpayer-funded rebate for election expenses run up by political parties and candidates. The Opposition New Democrats say the change would make it harder for low-income people to run for office, so the NDP may use provisions in legislature rules to hold back the entire bill until the fall.

The rules require the NDP to announce its decision by Wednesday. They also dictate that the Opposition cannot delay bills beyond November. A vote must be held then and the Tory majority could easily get the legislation approved.

Pallister has almost dared the NDP to oppose the bill’s measures.

“There’d be no reason to delay them. We ran on them, got a mandate from Manitobans to do these things,” Pallister told The Canadian Press.

“If they want to fight the bill, that’s their choice.”

NDP Leader Wab Kinew has hinted he might not delay the bill if Pallister removes the section that eliminates the campaign expense rebates, but has stopped short of a firm commitment. He wrote an open letter to Pallister on Thursday in which he suggested that the rebates be studied by an all-party committee.

On the floor of the legislature, NDP house leader Nahanni Fontaine spoke on the bill for 90 minutes Thursday before the weekend break. She has unlimited time when proceedings resume Monday.

Pallister has hinted for months that he might call a vote sometime before the scheduled date of Oct. 6, 2020. In a CBC interview on Friday, he was asked whether he would start a campaign before July 1 when the tax cut is set to take effect.

“I don’t think so. But again, I don’t know everything that’s going to happen with the NDP,” Pallister told the CBC.

“If they try to delay the PST reduction, or not support the bill, that’s a serious concern … and we need that bill to pass.”

Pallister said last month — and the opposition agreed — that he has the right to lower the tax July 1 and pass the bill at a later date. That’s similar to how governments often raise tobacco, fuel and other taxes immediately on budget day, weeks or months before the budget bill is passed into law.

But in the last week, Pallister and his finance minister, Scott Fielding, have changed their messaging to hint that opposition tactics may be putting the tax cut at risk.

The NDP isn’t buying that argument.