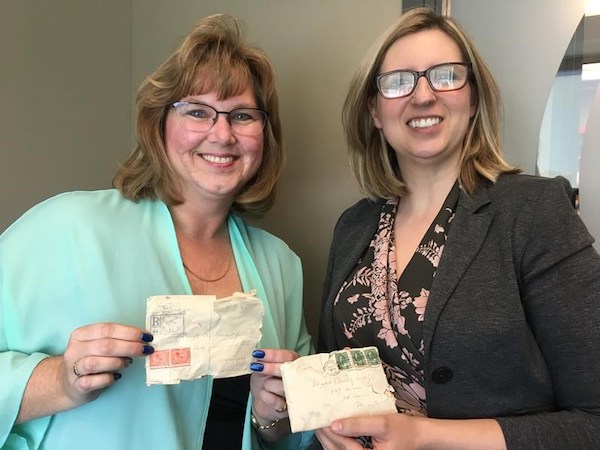 Sonya Berthin and Rose Mackesey, with McCor Management, pose with letters found during construction on a historic building in Winnipeg in this recent handout photo. Century-old love letters are being returned to a family after they were uncovered by a construction crew working on a historic building in Manitoba. The letters from 1918 and 1919 are addressed to a Rebecca “Becky” Rusoff in Winnipeg from a soldier in Halifax named “Soko.” (THE CANADIAN PRESS/HO)

WINNIPEG — Century-old love letters are being returned to a family after they were uncovered by a construction crew working on a historic building in Manitoba.

The slightly yellowed letters were found in the basement of the Paris Building in downtown Winnipeg on April 3.

Workers weren’t sure where the letters fell from, but Sonya Berthin, general manager for the company that manages the building, said they were in near-perfect condition in a pile on the floor.

Berthin took them back to her office and started reading, quickly realizing just what a unique find they were.

“It’s like reading a romance novel, except knowing this is real life,” Berthin said.

The letters from 1918 and 1919 are addressed to a Rebecca (Becky) Rusoff in Winnipeg from a soldier in Halifax named Soko.

In the earlier letter, the man talks about life of as a soldier in Halifax and how he had to build courage to send Becky a photo — although the photo was not located with the letters. Soko writes about how he thinks about Becky all the time and believes she is the perfect treasure.

“Whenever I think of you, I feel a perfect well of tenderness pouring from my heart. I feel I could love you until death.”

By the second letter, Soko is bearing his soul to Becky.

“It’s a funny thing, this love business. It has wrecked this calm exterior I have built around me. It’s even painful. I understand the bride’s tears at a wedding.”

The writer describes about how love is changing him, making him substitute others’ names in love songs with Becky’s.

But he also shares more information about their relationship before he travelled East.

Soko writes that they have known each other for five years and reflects on her beauty at a party they both attended.

“I love you because I know you. You are not a mystery to me, not an angel, but a girl.”

The letter ends with Soko writing that he hopes Becky also has feelings for him.

Berthin said she later learned the writer was Hyman Sokolov, who became a prominent lawyer and journalist in Winnipeg. His love letters appeared to be successful, because he eventually married Rebecca and they had three children.

Berthin has since been contacted by the Sokolov’s grandson and said she is working on returning the letters to the family.

“It is nice that these people care and want it, and want to share it with the rest of their family,” she said. “So many people let go of history.”

No one is quite sure when or how the letters ended up in the basement of the building now run by McCor Management.

Many businesses have called the building home since 1915, including the Western Jewish News, of which Sokolov was the managing editor.

Until 1925, it was the tallest building in Winnipeg.

Berthin said treasures from bygone eras can show up when crews are working on older buildings.

But, she added, this one will stay with her.

“Construction is messy and dirty, and its nice to come across something nice.”

← Previous: Winnipeg Golf Courses Set to Open for the Season Next: Connor Scores in OT as Jets Beat Blues 2-1 to Even Series →
Tags: Construction | Winnipeg