By Joe Harris, The Associated Press 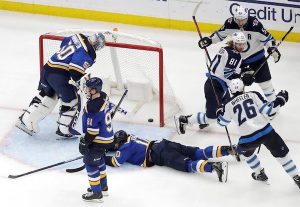 ST. LOUIS — With the Winnipeg Jets searching for the biggest goal of their season, players in the dressing room were loose heading into overtime Tuesday night.

“I mean, who doesn’t want to play in an overtime (playoff) game?” forward Kyle Connor said. “I think everybody had that kind of mentality and we went out there to win it, not to kind of hold back and sit back and try to defend them.”

Connor scored at 6:02 of overtime and the Jets beat the St. Louis Blues 2-1 to tie their best-of-seven Western Conference series at two games apiece.

Mark Scheifele also scored and Connor Hellebuyck made 31 saves for the Jets, who arrived in St. Louis down 2-0. It is the only first-round playoff series in which the home team has failed to win a game.

Game 5 is Thursday night back in Winnipeg.

“Every game has been a battle,” Scheifele said. “St. Louis has made us work for every inch and we know that’s going to happen again in Game 5 going back home. We’ve got to be prepared. We’ve got to get our rest and be ready to battle.”

Vladimir Tarasenko scored and Jordan Binnington made 37 saves for the Blues.

“Obviously, tough for sure. But again, it’s a tight series,” St. Louis coach Craig Berube said. “Two good teams, it could have gone either way.”

Connor ended it when he banged home a feed from Scheifele for his third goal in two games. It was the first playoff overtime winner for the Jets since they returned to Winnipeg in 2011.

“It’s going to look like this for possibly the next three games,” coach Paul Maurice said. “It’s going to be really, really tight. The entire team is going to have to play well, but you’re going to need one guy to put you over the top.”

Tarasenko beat Hellebuyck with a wrist shot from the top of the left circle 35 seconds into the third period to give the Blues a 1-0 lead. The power-play goal, Tarasenko’s eighth career in the post-season, moved him into a tie with Brian Sutter and Al MacInnis for fourth in franchise history.

Scheifele tied it at the 7:33 mark, tipping in a feed from Connor. It was Scheifele’s second goal of the series.

“Our game got better as the game went on,” Scheifele said. “We knew they were going to push and they pushed all night. They played solid. They made us work for every inch. Binnington made a ton of saves and so did our goalie.”

After a slow start in Game 3, the Blues came out strong in the first period. They built an 8-0 advantage in shots on goal as it took the Jets almost 11 minutes to test Binnington, who came up with a couple of saves on a Winnipeg power play to keep the game scoreless.

Pat Maroon had a pair of chances to give the Blues the lead in the second period, hitting the post off a pass from Tyler Bozak and getting stopped by Hellebuyck on a partial break.

Binnington came up big on a point-blank chance from Scheifele early in the second, and Brandon Tanev hit the crossbar on a breakaway midway through the period.

“With them winning two here and us winning two there, it’s like a restart to the series,” Blues forward Robby Fabbri said. “That’s the mentality we’re going to have to have. Just stay on an even keel and get back to work.”

FACE IN THE CROWD

Hall of Famer Wayne Gretzky took in the game. Gretzky played in 18 regular-season games for the Blues in 1996.

NOTES: Fabbri saw his first post-season action for the Blues on a line with RW Alexander Steen and C Ivan Barbashev. … Jets D Dustin Byfuglien had his eight-game playoff point streak snapped. … Binnington, who got an assist on David Perron’s first-period goal in Game 3, became the sixth Blues goaltender to record an assist in a playoff game and the first since Chris Osgood on April 12, 2004, vs. San Jose. … Jets RW Patrik Laine has scored in seven of nine career games at Enterprise Center.

The series shifts back to Winnipeg for Game 5 on Thursday night.