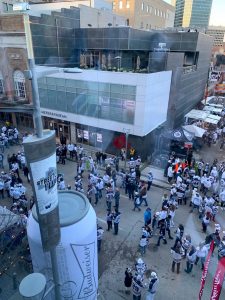 The Winnipeg Whiteout Street Party returns Thursday for Game 5 of the Stanley Cup Playoffs between the Winnipeg Jets and St. Louis Blues.

Motorists should allow additional travel time to get to their destinations, and use alternate routes such as Main Street and Osborne Street.

The Millennium Library will be closing early on Thursday, April 18 at 5 p.m.

During the street closures, access to the Millennium Library will only be available through the skywalk or through the parkade.

Winnipeg Transit buses will be rerouted off of Graham Avenue from Carlton Street to Garry Street beginning at 10:30 a.m. on Thursday, April 18 until 6:30 a.m. on Friday, April 19.

During these reroutes, bus stops located along Graham Avenue eastbound at Hargrave Street and at Smith Street will be temporarily out of service. Passengers who normally use these stops can catch their buses at either eastbound Graham Avenue at Edmonton Street or northbound Fort Street at Graham Avenue.

Bus stops located along westbound Graham Avenue at Donald Street and Edmonton Street will be temporarily out of service. Passengers who normally use these stops can catch their buses at westbound St. Mary Avenue at Donald Street and northbound Edmonton Street mid-block between St. Mary Avenue and Graham Avenue.

During the reroute, the Winnipeg Transit Plus loading zones on southbound Donald Street at Graham Avenue and at the Millennium Library will be temporarily relocated to eastbound Portage Avenue next to the Radisson Hotel. The City Place Winnipeg Transit Plus loading zone will be relocated to northbound Hargrave Street on the north side of St. Mary Avenue.

Ticketmaster recommends buying tickets from official sources — not scalpers — such as Ticketmater.ca and the Ticketmaster mobile app.

Don’t buy tickets that are being sold online before the onsale date, or listings that don’t disclose a specific seat location, as these increase the likelihood of ticket fraud.

Just follow one simple rule before posting a photo of your ticket: cover the code. On your paper or mobile ticket there is a one-of-a-kind code and if anyone acquires it they can make duplicate tickets to use or sell that render your tickets worthless. That’s a risk you don’t want to take.