‘Her Life Mattered:’ Friend Asks Manitoba Woman’s Killer How He Could Devalue Life 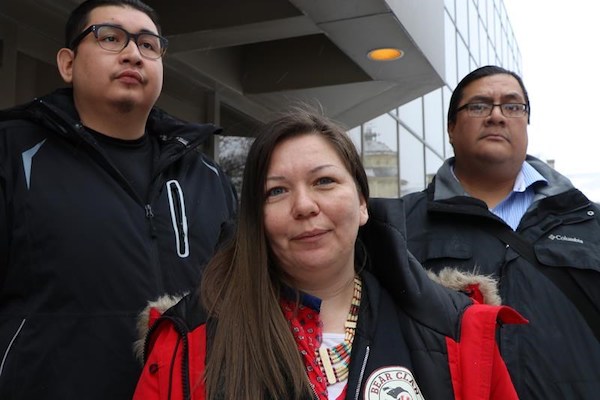 Melissa Stevenson, centre, stands outside the Winnipeg courthouse with Henry McKay, left, and Travis Bighetty after Christopher Brass was sentenced to 15 years for manslaughter in the shooting death of Stevenson’s best friend, 29-year-old Jeanenne Fontaine, on Wednesday, Jan. 23, 2019. (THE CANADIAN PRESS/Kelly Malone)

WINNIPEG — The best friend of a Manitoba Indigenous woman killed during a botched robbery looked at a man convicted in her death and asked how a life could be worth that little to him.

“Forty-five dollars was what my friend’s life was valued in (Jason) Meilleur’s eyes,” Melissa Stevenson said during a sentencing hearing Wednesday.

Jeanenne Fontaine, 29, was shot and her Winnipeg home set on fire in 2017 when three men came to her house to collect on a drug debt her boyfriend owed. In January, a jury found Meilleur guilty of manslaughter.

Stevenson told Meilleur’s sentencing hearing that her friend was struggling with addiction after her cousin’s death, but she had goals to get clean and be a good mother to her three children.

“Her life was beautiful, her life mattered and she deserved better,” Stevenson said.

Fontaine was the cousin of Tina Fontaine, a teenager whose body had been found three years earlier in the Red River, and whose death fuelled renewed calls for a national inquiry into missing and murdered Indigenous women.

Tina had also spiralled downward after her father, Eugene Fontaine, was beaten to death in 2011. Two men pleaded guilty to manslaughter. Victim impact statements at their trial described how Tina had a happy childhood, but was unable to cope with her father’s death and drifted away from the people closest to her.

In diary entries read in court, Jeanenne Fontaine wrote a list of goals for her life. The final one said: “I need to find a new home.”

Meilleur’s eyes filled with tears as he apologized to the woman’s family and friends.

The trial heard how the three men showed up at Fontaine’s house to collect a drug debt for Meilleur’s girlfriend and were looking for Fontaine’s boyfriend. When he wasn’t there, the situation turned into a botched robbery in which she was shot in the head and the house was set on fire.

Malcolm Mitchell pleaded guilty to second-degree murder last year and was sentenced to life. Christopher Brass was found guilty of manslaughter and in January was given 15 years, which is to be served at the same time as life sentences for first- and second-degree murder convictions in separate matters. He will not be eligible for parole for 40 years.

Crown prosecutor Michael Desautels argued that Meilleur was the “Trojan Horse.” He was collecting the debt, he brought Mitchell and Brass and he was the one who got them invited into the home.

“He was bringing two hyenas with him, people he knew were violent,” Desautels said.

Defence lawyer Theodore Mariash argued his client was only going to collect the debt, and should have stepped in to stop the others when things turned dangerous. But, Mariash said, he can’t be compared to the two other men who are “homicidal maniacs.”

“Brass is a mass murderer. He killed three people that we are aware of in two months.”

The Crown is asking that Meilleur be sentenced to 15 years and the defence has asked for four. The judge will deliver a decision next month.

In a victim impact statement read into court by Desautels, Fontaine’s mother, Lana Fontaine, said her daughter was beautiful and had a smile that was contagious. She said the loss of her daughter brings her pain every day and she does not think she will ever find forgiveness.