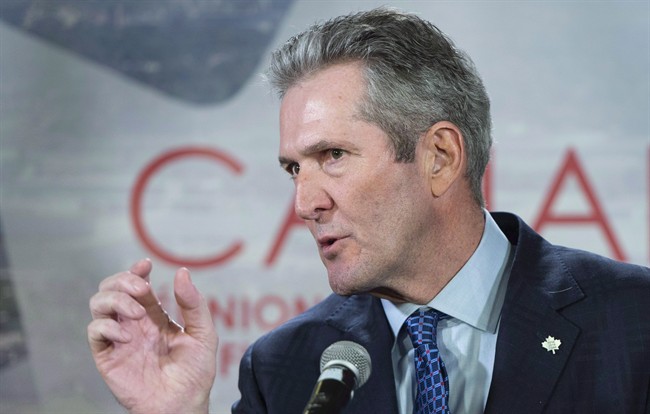 Manitoba Premier Brian Pallister responds to questions during a news conference at the first ministers meeting in Montreal on Friday, Dec. 7, 2018. (THE CANADIAN PRESS/Paul Chiasson)

WINNIPEG — The Manitoba government is launching an independent review of how Winnipeg city hall approves and inspects construction projects and property development, to address what Premier Brian Pallister says is a drag on the economy.

Pallister also offered Thursday to cost-share a performance review of all city spending in order to find efficiencies.

The premier’s comments to a Manitoba Chambers of Commerce breakfast meeting were the latest volley in a battle over financing and governance between the province and city.

“The mayor’s office has been notified by our senior officials that we will be undertaking an independent review of how construction and development is approved, permitted and inspected in our province.”

Pallister’s comments were applauded by the business crowd. He said there have been long-standing concerns about wait times to get projects approved in Winnipeg.

The Progressive Conservative government and the provincial capital’s city hall have been at odds for months over financial matters.

Mayor Brian Bowman has said the province squeezed the city by cutting its share of transit funding and withholding millions of dollars for past construction projects that were jointly funded.

Manitoba Finance Minister Scott Fielding has said the city gets a fair funding deal from the province and that it has a spending problem rather than a revenue one.

Bowman said Thursday he would co-operate with any provincial review, but said the premier’s plan seemed more about scoring political points than any practical outcome.

“In my time as mayor, the premier has only formally agreed to meet with me three times,” Bowman said. “The way in which the province can demonstrate that it is more than a political effort is, firstly, maybe have a meeting.”

Bowman added that the city called on the province two years ago to conduct a broad public inquiry into controversial city property developments that occurred under the previous mayor. But the province has refused.

The Tories launched their own fiscal review of provincial services shortly after winning the 2016 election. Pallister said Thursday he would be willing to help the city pay for a similar study to find areas where it could cut costs.

“The studies are to help us point in a greater and more effective way towards the future and to get better value for taxpayers’ money. It should be the goal of all of us.”

The premier also dropped another strong signal Thursday that he may call an election this year instead of the Oct. 6, 2020 date scheduled under provincial law. In response to a question from a chamber official, Pallister said an election in 2020 would interfere with celebrations marking the province’s 150th birthday.

“It would be a horrible thing to do — to interrupt a party that only happens, what, once every 150 years?”

Bowman said Pallister should call a public inquiry into the construction controversies before calling voters to the polls.