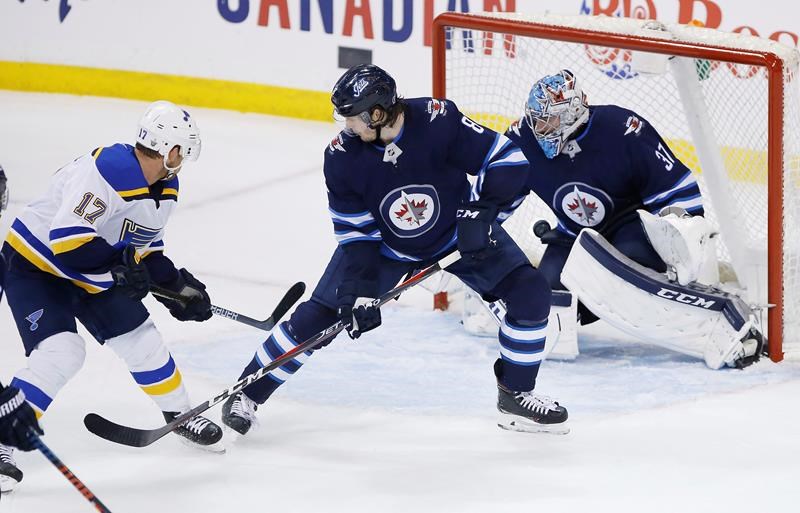 WINNIPEG — Jacob Trouba hopes recent history will repeat itself for the Winnipeg Jets.

The Jets face elimination from the playoffs in Saturday’s Game 6 in St. Louis, but the veteran defenceman and his teammates are drawing confidence from a pair of victories at Enterprise Center over the last week.

“It’s the biggest game of the year so we’ve got to show up and we know we can do it,” Trouba said Friday after Winnipeg held an optional skate before flying to Missouri.

“We know we can play in there and we want to get this thing back to seven games.”

The home team has yet to win over the first five games of the best-of-seven Western Conference quarterfinal. It’s the fourth time in NHL history, and first since 2004, that has happened to start a series.

St. Louis took a 3-2 series lead after defeating the Jets 3-2 on Thursday at Bell MTS Place. Jaden Schwartz scored the winner with 15 seconds left in the third period.

Winnipeg had a 2-0 lead after the first period, but the Blues scored twice in the third before Schwartz completed the comeback.

Jets forward Andrew Copp said the players’ mood is positive and they can flush the late loss.

But this series has been anything but normal, as the road victories have proven.

“It’s just so tight, so even, that it is just a little edge that puts you over the top,” Winnipeg head coach Paul Maurice said after holding a meeting with the players following the skate.

He expects last season’s playoff experience will help his team.

In the second round against the Nashville Predators, Winnipeg lost 4-0 in Game 6. The Jets then went into Nashville and triumphed with a 5-1 victory. Vegas ended up beating Winnipeg in five games in the conference final.

“For sure it helps,” Maurice said. “You’ve been in tight games, in games you’ve needed to win. You’ve had that emotion of losing a game, so rebounding off tough events, they’ve got experience doing it.”

Copp agreed handling that adversity can have a positive impact.

“I guess we can draw a little confidence that we’ve been able to do it before,” Copp said. “We know the recipe. We know the way we have to play and how they’re going to try and control our speed.

“It’s not really rocket science. Like I said, we know the recipe and it will be up to us to play as close to a T as possible.”

They certainly won’t be approaching the game as just another one on the calendar, Trouba said.

“You know it’s an elimination game, you’re not going to lie to yourself or try to paint a picture that’s not what it is,” he said.

“You have to be honest with yourself and know your back is against the wall and we have to find a way to get this series back to Winnipeg.”

Winnipeg (47-30-5) and St. Louis (45-28-9) tied with 99 points at the end of the regular season, but the Jets finished second and earned home ice with the higher win total. The Blues missed the playoffs last season.