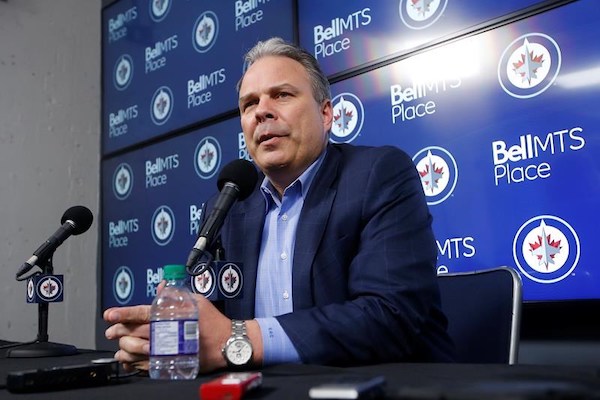 Winnipeg Jets Executive Vice President & General Manager Kevin Cheveldayoff speaks to media at the closing press conference after losing in the first round of the NHL playoffs in Winnipeg on Monday, April 22, 2019. (THE CANADIAN PRESS/John Woods)

WINNIPEG — General manager Kevin Cheveldayoff says an upcoming summer of “tough decisions” means changes are on the way for the Winnipeg Jets.

Young stars such as Patrik Laine and Kyle Connor are due hefty raises now that their entry-level contracts are coming to an end, but the team was already near the US$79.5-million salary cap so some familiar faces may be gone to free up cash.

“We have some tough decisions to make this summer, a lot of them,” Cheveldayoff said Monday after exit meetings with players following the team’s elimination from the playoffs last Saturday.

“Is the team going to be the same? I could stand here last year with greater certainty that there was going to be a lot of pieces that we’re going to do our darnedest to keep and come back, and even then we couldn’t do it all then. This year, there’s certainly going to be some changes.”

The Jets went into the campaign with expectations they could contend for the Stanley Cup after reaching the Western Conference final last season before losing in five games to Vegas.

Instead, Winnipeg (47-30-5) couldn’t get on a roll to end the regular season and was unable to flip the switch in the playoffs. The St. Louis Blues (45-28-9) knocked them out of their first-round matchup in six games, four decided by one goal.

“Not worried about that right now,” Laine said of a new contract. “Right now, I want to forget everything that is involved with hockey.”

Laine, who scored three goals in the playoffs, revealed he suffered a “small” groin injury in Game 5, but could handle it. He’d also dealt with ongoing back problems during the season, but “I was able to play good.”

He went through a number of dry scoring spells after scoring 18 goals in November, but finished with 30 and 50 points. That was down from 44 goals and 70 points last season.

Laine said he’s not playing in the world championship and will go home to Finland to golf and spend time with family and friends.

The Jets have 15 pending free agents.

Laine and Connor, who scored 34 goals, are among eight restricted free agents, which also includes defenceman Jacob Trouba. He went through arbitration last summer and signed a one-year, $5.5-million contract.

There are seven unrestricted free agents, most notably defencemen Tyler Myers and Ben Chiarot and forward Brandon Tanev, who had surgery for a broken finger days before the playoffs. Myers had a $5.5-million contract and the team may not be able to afford to keep him.

Head coach Paul Maurice is well aware he’ll be icing a different group next season, but he doesn’t think the window of opportunity for success is beginning to close.

“There are too many guys between the 20- and 26-(year-old) range that aren’t at their peak or at their best,” Maurice said. “So, no I don’t feel that.

“Our team is going to change clearly, and the cap is going to affect that, but those players that are coming back have lots of room to improve.”

One area he’s tagged for improvement is team defence.

“At the end of it, if you look at it we weren’t quite a good enough defensive group this year. It wasn’t a strength,” Maurice said.

“And I felt like last year it was the quiet strength of our team nobody talked about because lots of people were scoring goals and were feeling good about it.”

Winnipeg’s defence was hit by lengthy injuries in the new year to Dustin Byfuglien and Josh Morrissey, but both were back for the playoffs.

Forward Nikolaj Ehlers revealed he suffered a fracture in his right leg while blocking a shot in Game 5, but treatment helped enough that he got the go-ahead to play. He won’t need surgery, he added.

While fingers are always pointed at a coach when a team doesn’t get close to expectations, Cheveldayoff said the coaching staff “did what they could to get every ounce of this team.”

Captain Blake Wheeler threw his support behind Maurice, then took some of the blame.

“I would say you point the first one at me, ” Wheeler said. “It’s my job to get this team kind of to that next level. The coach isn’t on the ice, the players are on the ice. We’re the ones that are accountable.

“One of the most winningest coaches of all time in the history of this game. So, I think his record speaks for itself. Obviously I’d go through a brick wall for the guy. I don’t want to play for anyone else. That’s where I stand.”