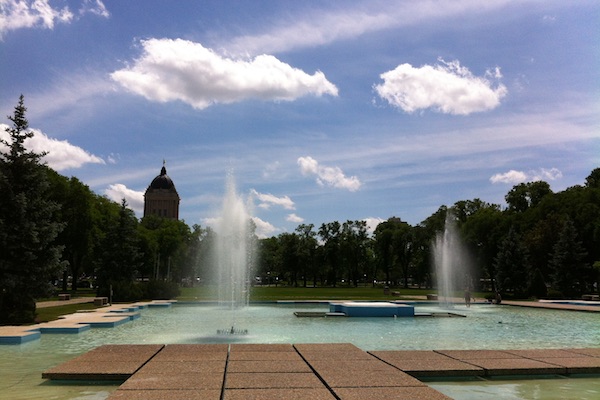 WINNIPEG — The fountain in Memorial Park will receive a major restoration as part of Manitoba 150 celebrations, the province announced Tuesday.

Premier Brian Pallister says the project is part of $45 million in infrastructure funding planned across the province next year.

“2020 is a significant milestone for our province, one that deserves celebration and recognition,” said Pallister.

An engineering report says all the components of the park have reached the end of their serviceable life. The fountain requires mechanical, electrical and structural upgrades, and preliminary design work is underway to make the improvements within the existing park design. Work will include upgrading the lighting, seating and signage around the fountain, according to the province.

Other nearby work includes concrete reconstruction on Memorial Boulevard from Broadway to York Avenue.

Officially called the City Hydro Fountain, it was opened on September 28, 1962 to honour the 15th anniversary of the former Winnipeg Hydro. The structure was designed by architect Cameron Man.