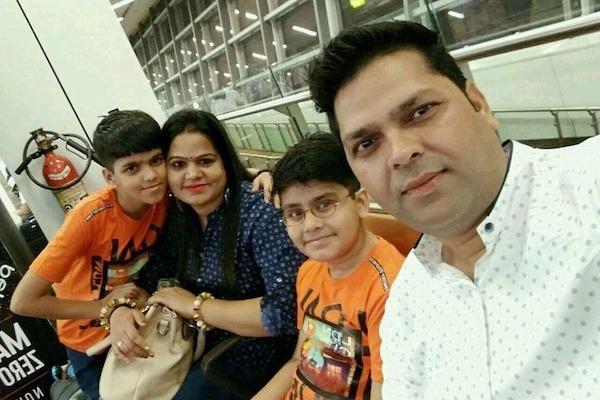 Ram Nivash Misra (right) is shown with his family in this undated photo. (GOFUNDME)

WINNIPEG — A father has died after he and his two sons were pulled from a swimming pool at a Winnipeg apartment complex.

“They are not doing good. They are in very, very critical condition,” Pandey said.

Paramedics were called to the pool in the city’s west end Sunday. Pandey said he doesn’t know what happened in the water but called it a tragic accident.

A witness described Misra and the two boys being rushed out of the building on stretchers while paramedics performed CPR.

The father, originally from India, moved to Winnipeg about seven months ago to work at Canada Life. His family joined him a month ago.

Pandey said they moved into an apartment in the Courts of St. James complex with the pool only 20 days before.

“(His wife’s) whole world collapsed in minutes,” he said.

Members of the Hindu community are raising funds for the family, Pandey said, and one of Misra’s coworkers has created a GoFundMe page.

“Ram is the sole income earner for his family. They have moved to Winnipeg recently and they do not have any contacts in Winnipeg,” the page says. “His wife is trying to cope up from the shocking incident that occurred to her family.”

The property management company which operates the complex did not provide information on what happened, but Globe Property Management Senior Vice-President Ron Penner has said his thoughts are with the family.