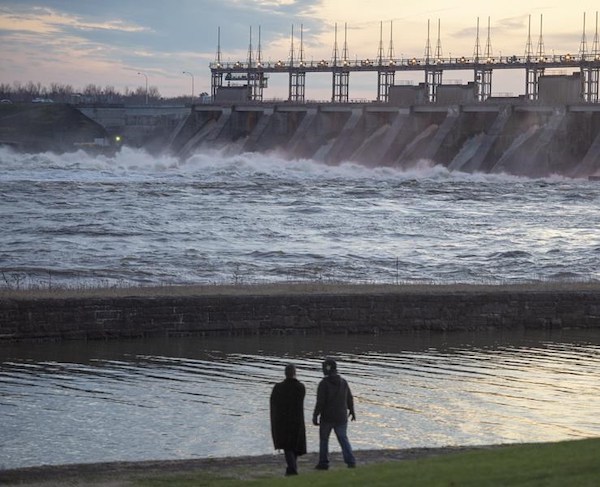 Water rushes through the Carillon Hydro electric dam Thursday, April 25, 2019 in Carillon, Quebec. Authorities have issued an evacuation alert further up river warning that the Belle Chutes dam is at risk of failing. (THE CANADIAN PRESS/Ryan Remiorz)

OTTAWA — Two of Canada’s biggest cities have declared states of emergency and three provinces have asked for federal help to fight rising flood waters as Mother Nature’s wet wrath of spring marches across central Canada and the Atlantic.

Montreal Mayor Valerie Plante said Friday after afternoon that her city had felt it had matters under control until a rainstorm dumping as much as 60 mm of rain on already flooded regions moved in.

Ottawa Mayor Jim Watson declared a state of emergency for similar reasons Thursday, prompting the federal government to send 400 soldiers to help sandbag and aid in relief efforts to small rural communities on the west edge of Ottawa. Late Friday, they were also sandbagging the road to one of the city’s two water-treatment plants, the city said. Another 1,000 soldiers were deployed in Quebec earlier this week and 310 in New Brunswick.

Municipalities are calling for volunteers to help if they can — to fill sandbags through makeshift devices made from sawhorses and ladders and road pylons turned upside-down to make funnels; to haul the bags into pickups and wagons and trailers; and to pile them around homes and businesses in the hope they can keep rising rivers and lakes away.

“Emergency situations like these tend to bring out our better angels,” he said at a news conference in Regina. “The instincts of Canadians are to help each other. That’s who we are and that’s what we do.”

Water regulators estimate the Ottawa River’s level will rise nearly a metre within the next few days, well above its peak in a 2017 flood that was thought to have been a once-a-century event.

The most serious flooding so far is in villages along the Ottawa River outside the downtown core. Ontario Premier Doug Ford visited Friday morning to meet homeowners and help fill some sandbags. He said the government is on “high alert” and has told Ottawa the province will help with whatever is needed.

“This is absolutely heart-wrenching,” Ford said. “It’s one thing to see it on the cameras, it’s another thing when you talk to the people face-to-face — and it just rips your heart out.”

Pete Davies is trying to save his bungalow in the rural Ottawa community of Woodlawn after rebuilding following the 2017 flood, which forced his family out of their home for more than two months.

They’re hoping to stay in their house as long as possible this year with the help of a sump pump and generator, but Davies knows they could be forced to evacuate.

The municipality of Clarence-Rockland just east of Ottawa, as well as the towns of Bracebridge and Huntsville in the Muskoka region north of Toronto, have also declared states of emergency.

Bracebridge Mayor Graydon Smith asked cottage owners not to check for damage this weekend. He is worried people will put themselves in harm’s way.

Several regions in the province are affected by flooding, including Gatineau and other communities along the Ottawa River, parts of Montreal and the Beauce region south of Quebec City.

Provincial officials said 3,150 homes had already been flooded and 1,111 people forced to leave. Another 2,300 homes had been isolated by flooding.

At least 13 municipalities have declared states of emergency. Soldiers were dispatched to reinforce a dike just west of Montreal that was threatening to give way and force 1,000 people from their homes.

Officials in Quebec are also keeping a close eye on a hydroelectric dam, on a tributary of the Ottawa River between Ottawa and Montreal, that’s at risk of failing.

Water at the Chute-Bell dam has reached levels expected once every 1,000 years, but Hydro-Quebec said it’s confident the structure is solid.

Gatineau mayor Maxime Pedneaud-Jobin said he expects river levels in his region to peak by Monday or Tuesday. But because snow melt from the north has not yet reached the area, he said water levels could remain very high for two weeks.

Flooding along the Saint John River was receding in Fredericton, where parts of the downtown core were underwater this week, but the weekend rainfall is going to reverse that.

Goodale said 140 roads have been closed due to flooding, including the Trans-Canada Highway between Oromocto and River Glade.

The Red Cross had registered 940 evacuees from 330 households in New Brunswick by Friday afternoon.

The rising Red River in southern Manitoba has forced some road closures and a small number of evacuations near the community of St. Jean Baptiste. Earlier predictions for major flooding between the U.S. border and Winnipeg haven’t come to pass because of less snowfall than expected in April and a slow spring melt.

Many of the people in the flood zones are feeling a sense of deja vu. The Ottawa River is flooding for the second time in just three years and the Saint John River is over its banks for the second year in a row. Red Cross officials in New Brunswick said Friday 70 per cent of the people asking for flood assistance this year also asked last year.

“I think all levels of government are learning some expensive lessons from this flooding experience of the last number of years and the message from climate change is: ‘Don’t think it is going away,’ ” said Goodale. “It’s going to get progressively more and more difficult. It’s going to get worse rather than getting better.”

Ford also said having another 100-year flood just two years after the last one can be blamed on climate change.

“Something is going on and we have to be conscious of it,” he said.

Quebec Premier Francois Legault and New Brunswick Premier Blaine Higgs both said this week it is time to start getting homeowners in these flood prone areas to move.

The federal disaster-assistance program covers 90 per cent of government costs for major events and provincial programs can help municipalities pay some bills. In 2017, the Ottawa River flooding also racked up $223 million in private insurance coverage.

Goodale said costs will be worked out later.

“The fact of the matter is we are all just putting our shoulder to wheel in the most effective way to make sure that the personnel and the resources are available to fight the immediate disaster and that we keep people safe and secure.”

—with files from Stephanie Taylor in Regina, Sidhartha Banerjee in Montreal, Michael Tutton in Halifax and Terry Pedwell and Kristy Kirkup in Ottawa.