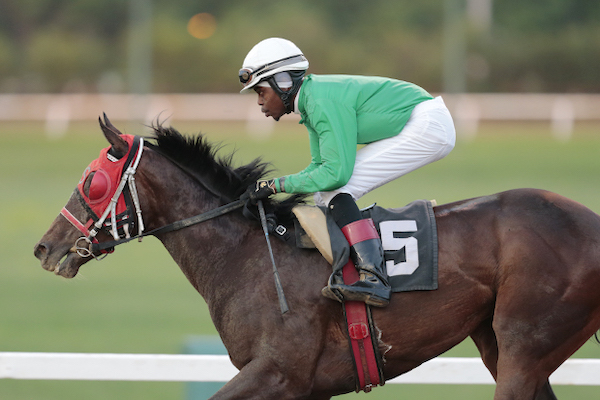 WINNIPEG — Antonio Whitehall makes no bones about it. The reigning champion jockey at Assiniboia Downs is committed to Winnipeg and he is absolutely committed to racing at ASD.

And as the 50-day 2019 meet approaches, Whitehall is comfortable in Winnipeg and ready to defend a title that he’s worked hard to earn.

“Oh yes, I’m committed to racing here,” Whitehall said with a smile. “I love it here. That’s why I come back every year. People treat you good here and they give you a chance. I’m committed, dedicated and motivated. This year, I want to win another jockey championship, but I’m also looking forward to a safe meet.”

Last summer, Whitehall had a lot more than just “a safe and successful meet.” He won the jockey championship with 41 wins, 51 second-place finishes and 45 thirds in 250 races. He earned $361,213 for his owners.

However, it wasn’t his best year at the Downs. In his rookie season, he won 68 times and yet lost the jockey championship on the final day to his best friend, Christopher Husbands.

Still, there is nothing better than being called “champion jockey.”

For Whitehall, the 25-year-old from Bridgetown, Barbados, who first came to Winnipeg in 2016, Assiniboia Downs is like home. He’s well-liked, he gets great mounts and he’s made so many friends, he feels like he’s been here all his life.

Of course, that isn’t the case.

From the tiny Caribbean island of Barbados, Whitehall started riding dressage horses and show jumpers at 15. It wasn’t long, however, that he found himself at Garrison Savannah Racetrack, the only track on the island, riding thoroughbreds.

“I started out exercising horses in dressage and show jumping, but by the time I was 16, I had progressed to horse racing.

Whitehall went on to win a handful of stakes races in Barbados and by 2015, he was one of the top riders on the island. That’s when his friend, former Downs champion Chris Husbands, who is now riding at Woodbine, suggested he try riding in Canada.

“I wanted to ride more,” Whitehall said. “In Barbados, there are only two race days a month. There were too many small cards with small purses. I wanted to ride almost the whole week. So, Christopher Husbands told me to come here. When I arrived, I had no idea. I had no agent, no nothing.

“But I’d seen Kirt (Contois) in Barbados scouting jockeys and I think that’s why he took me in my first year. And that turned out to be my best year. I won 68 races and was second to Christopher Husbands. That was in 2016 and since then, I’ve been successful every year because I’ve had a good agent — plus hard work, good barns and getting some early wins.

“And, quite fortunately, I met Don Schnell, a very talented trainer. Her’s given me lots of rides on some very good horses.

Contois, an agent, a handicapper and the track announcer at ASD, is the guy who got Whitehall going. Now that Contois has more responsibility at the Downs, he’s turned over Whitehall’s book to successful agent Shane Ball. However, last year, it was Whitehall and Prayven Badrie, another of Contois’ jocks, who battled head-to-head, right down to the final day, for the jockey title. This year, with Badrie off to Alberta to race, Whitehall is the pre-season favourite to win the title again.

“This year, I just want a safe successful meet so I’ll be back next year,” Whitehall said. “And don’t worry. I’ll win another jockey championship. I mean, I’m not going down without a fight.”