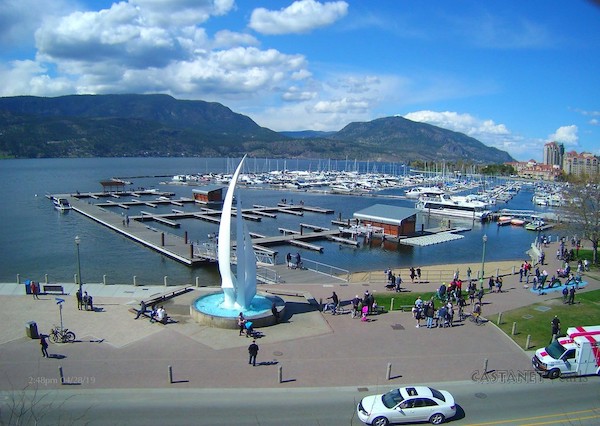 People gather on the Kelowna waterfront Sunday afternoon as RCMP tried to arrest a man who reportedly grabbed a baby before jumping into Okanagan Lake, as seen in this still from a webcam. (CASTANET.NET)

KELOWNA, B.C. — A man is awaiting a court appearance in Kelowna, B.C., after a bizarre weekend incident which began with a baby being allegedly snatched from its mother and ended with the RCMP wading into Okanagan Lake to arrest a suspect.

Mounties say in a release that a family was walking with the baby through a waterfront park near the downtown core around 2:30 p.m. Sunday when the baby was grabbed.

Police say the man let go of the child after a struggle, then stripped naked, jumped in the lake and swam to a log boom.

The 30-year-old man, who is originally from Alberta, was eventually coaxed closer to shore where two officers arrested him.

RCMP Cpl. Jesse O’Donaghey says the baby was checked in hospital and released, while the suspect faces potential criminal charges and was to face a court appearance Monday.

O’Donaghey said victim services volunteers are supporting the family and investigators are appealing for more witnesses to come forward.

“We appreciate that many witnesses may feel that police have obtained information from enough witnesses at the scene, however each and every eye witness account is helpful,” he said.