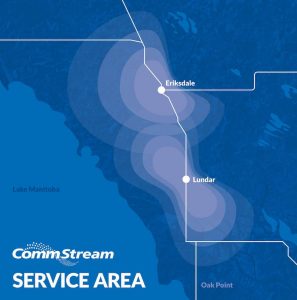 A partnership between a local credit union and a telecom company has brought increased internet speeds to two communities in Manitoba’s Interlake.

Noventis Credit Union and CommStream have teamed up on an innovative cost-shared infrastructure investment in Eriksdale and Lundar.

The result means residents will enjoy high-speed internet up to 1 Gbps through a cable connection and 50 Mbps over wireless. Typically, a rural Manitoba resident can only expect speeds of up to 5Mbps through old copper lines, compared to speeds in excess of 300Mbps in Winnipeg

The cable systems in Eriksdale and Lundar are live now, and the wireless service will be available on May 1. The project included building towers and fixed wireless systems in both communities.

“Living in small communities has many benefits, but often the price people pay to live there is to sacrifice on services that urbanites take for granted,” said Trevor Finch, sales and marketing director with CommStream.”

Noventis and CommStream say they will evaluate the recent project and potentially expand it to additional Manitoba towns in the future.