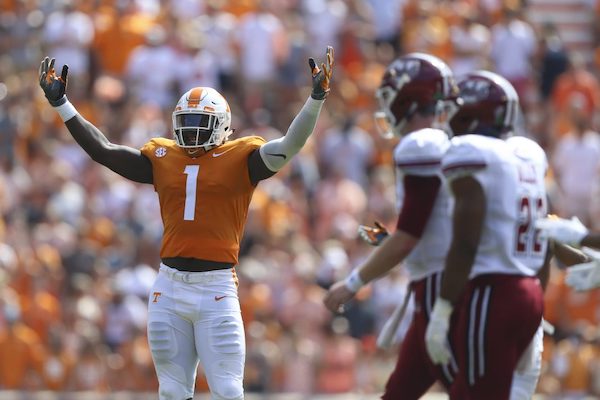 It was a somewhat tense start to the CFL draft for Kyle Walters.

The Winnipeg Blue Bombers GM went into the first round Thursday night with the fourth and fifth selections and a clear idea of who he wanted to take. And after some anxious moments, Walters landed two players he coveted — Windsor offensive lineman Drew Desjarlais then Tennessee defensive lineman Jonathan Kongbo.

There was no shortage of quality offensive lineman in the draft so even if Desjarlais had gone in the first three picks, Walters would’ve still got a solid player at No. 4. But the real wildcard was Kongbo, a defensive player with definite NFL ability coming off a serious knee injury.

The six-foot-five, 254-pound native of Surrey, B.C., started 17-of-30 games at Tennessee, seeing action as both a linebacker and defensive lineman. Over his collegiate career he had 51 tackles, 5.5 tackles for loss, 3.5 sacks, two interceptions — returning one 50 yards for TD — and two knockdowns.

However, Kongbo suffered a season-ending knee injury — tearing both the ACL and MCL — during a game in October versus Auburn. Most CFL officials expected Kongbo to land in the NFL in 2019 but he was neither drafted nor signed afterwards as a priority free agent.

Despite the injury, Kongbo finished sixth on the CFL scouting bureau’s top-20 draft list and had garnered plenty of interest north of the border. That left Walters unsure if he’d even be there when it was Winnipeg’s turn to pick.

Adding to the intrigue was Walters being unsure what Hamilton might do at No. 2 and feeling Edmonton could be looking for a defensive lineman with the very next pick. Had either team selected Kongbo, then Walters was prepared to try shopping the fifth selection and move down in the draft.

Much to the Bombers’ relief, the Ticats took Waterloo offensive lineman Jesse Gibbon, then Edmonton followed by selecting Laval defensive lineman Mathieu Betts, who last week signed an NFL contract with the Chicago Bears. That freed up Walters to keep both of his picks and take the players he really wanted.

“It’s hard to predict,” Walters told reporters in Winnipeg on Friday. “We thought maybe Edmonton at No. 3 could target a defensive end . . . Hamilton was a mystery with all of those picks (three in the first 11 selections).

“If (Kongbo) wasn’t there at No. 5 we might’ve explored trading down if that was an option. Once that third pick was announced, we sort of took an exhale and said. ‘OK, let’s just stick with it,’ . . . when that was there we called the names we’d targeted and moved on.”

Walters said there was interest from other clubs in the fifth overall pick before the draft but it all died down once the proceedings began.

“We were not going to trade anything before the draft,” Walters said. “If the first three picks went a certain way, I was going to get back on the phone and see if we could drop down out of No. 5.

“But once Edmonton called Betts at No. 3, there was no interest in doing anything.”

Walters admitted he’s taking a risk with Kongbo, but the player’s ability and potential were simply too good to pass up.

“He’s the one where you do the film and you’re watching this long, athletic, aggressive, physical player playing at the University of Tennessee in the SEC against big-time opponents,” Walters said. “You just don’t see this very often in our draft.

“In our mind he was the top prospect on just football ability. With two first-round picks, he’s just too good a talent to not take and take our time with him until he gets healthy.”

Kongbo isn’t expected to be healthy enough to resume playing until July. But when he returns, he’ll give the Bombers some roster flexibility and allow them to utilize an American elsewhere.

“He’s just a good football player regardless of his position,” Walters said. “But he’s excited, he just wants to play football.”