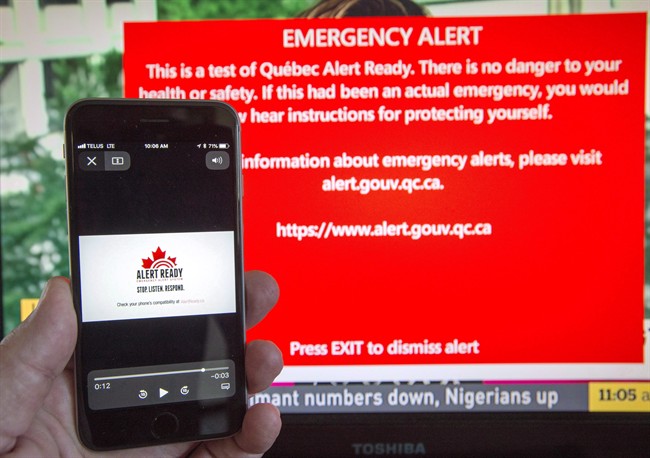 A smartphone and a television receive visual and audio alerts to test Alert Ready, a national public alert system in Montreal on May 7, 2018. (THE CANADIAN PRESS/Ryan Remiorz)

A nationwide test of the Alert Ready system will be conducted Wednesday afternoon.

The alert will be sent out at 1:55 p.m. CT in Manitoba by Pelmorex Corp., which operates the system.

Multiple communications channels are utilized to broadcast the alert, such as radio, television and via cell phone, where most Canadians will see the alert. However, not all Manitobans will receive the alert due to device compatibility, connection to an LTE network, cell tower coverage and individual device software and settings.

Those without a wireless device or those living in rural Manitoba can still receive the alert thanks to new technology.

The new “Connect-By All-Net” service was developed in Winnipeg and is integrated with Canada’s national emergency alert system. The service provides municipal staff with the ability to send out information to people on their chosen communication services including landline phones.

“We have been using the technology for the past year for our regular communication and it is an essential piece in our overall communication strategy,” said Chris Ewen, Mayor of the Rural Municipality of Ritchot.

Testing on Wednesday will be carried out at 10:55 a.m. local time in New Brunswick and Newfoundland, 10:25 a.m. in Labrador, 12:55 p.m. in Prince Edward Island and at 1:55 p.m. in Alberta, British Columbia, Manitoba, Nova Scotia, Saskatchewan, the Northwest Territories, Nunavut and Yukon. Ontario and Quebec have opted out of the test due to the ongoing flooding in the regions.