Home » The Canadian Press » As Child Benefits Climb, Feds Look to Get Payments in to Families Missing Out

As Child Benefits Climb, Feds Look to Get Payments in to Families Missing Out 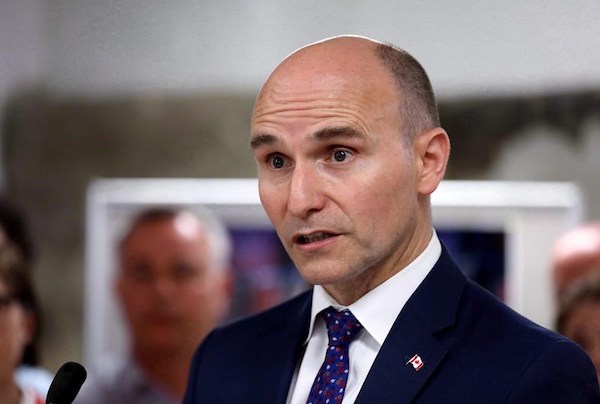 Federal Minister of Families, Children and Social Development Jean-Yves Duclos is seen at a youth homelessness organization in Toronto on Monday, June 11, 2018. (THE CANADIAN PRESS/Colin Perkel)

OTTAWA — A planned increase in the value of the Canada Child Benefit will miss just over one-fifth of Indigenous families living on reserves, part of the five per cent of families nationwide who don’t receive the monthly payments.

Federal officials plan to visit more than 500 rural and remote Indigenous communities over the next 11 months to get more people to take advantage of the benefit by simply filing their taxes.

The value of the tax-free benefit is based on income plucked from annual tax returns that were due last month.

Government documents obtained by The Canadian Press under the access-to-information law show that in the first year of a three-year outreach plan, officials visited 613 Indigenous communities, 62 per cent of which Employment and Social Development Canada had not previously visited.

The documents for a meeting last June between officials at ESDC and the Canada Revenue Agency noted challenges including geography, language and weather, but found a positive effect “on service delivery for both clients and staff.”

Social Development Minister Yves Duclos said the numbers of people missing out on the benefit are a concern, despite being an improvement on the system the Canada Child Benefit replaced when it was introduced in July 2016.

Under the previous mix of a universal monthly benefit and assorted tax credits, take-up was about 50 per cent of Indigenous families, Duclos said.

“In short, more to do, but I think some progress that we can build on.”

The value of the benefit is increasing this summer for the second year in a row under a plan the Liberals first announced in fall 2017, to peg payments to the rate of inflation, similar to payments from the old-age security and the guaranteed income supplement programs.

There is broad agreement that the child benefit has helped lift some 278,000 children above the official poverty line, with help from good economic conditions, but experts predicted a decline in the effects if the Liberals had waited to index the benefit to the rate of inflation until next year as originally planned.

The concern was that the benefit’s buying power would erode over time as prices increased but benefit payments did not. The parliamentary budget watchdog added another wrinkle in a 2016 report that predicted a decline in the number of families qualifying for the benefit if the payments didn’t adjust to incomes that increased with inflation.

Duclos couldn’t say how many more children may be lifted above the official poverty line with an indexed child benefit. Official poverty numbers for 2019 won’t be available until 2021.

Liberal MPs used social media Monday to tout the increase, often without mentioning that it’s to keep pace with inflation. Duclos said one of the messages was that sound social policy required keeping up with inflation, which wasn’t the case with the previous Conservative government’s universal child-care benefit.

Duclos said he didn’t see his government — even a re-elected one — going back on the decision to index the benefit.

“That would be a terrible thing to do and all the partners and the stakeholders with whom we’ve had the fortune of working the last years have been very strong in advocating that this has to be the case,” Duclos said.