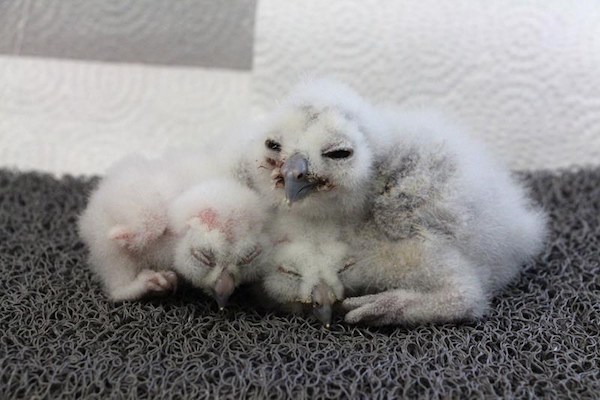 Northern spotted owl chicks are seen in this undated handout photo. Curious bird lovers can now get a glimpse of the youngest member of one of the most endangered creatures in Canada. A webcam has been set up above the nest of a pair of northern spotted owls, just days after a newly hatched chick was placed inside. (THE CANADIAN PRESS/HO, Northern Spotted Owl Breeding Program)

LANGLEY, B.C. — Curious bird lovers can now get a glimpse of the youngest member of one of the most endangered creatures in Canada.

A webcam has been set up above the nest of a pair of northern spotted owls, just days after a newly hatched chick was placed inside.

Fewer than 10 northern spotted owls are left in the wild in Canada so a breeding program in Langley, B.C., takes a fertile egg from a captive pair, incubates and hatches it and then transfers the chick to foster parents.

It’s hoped the parents will then produce their own eggs in the next breeding season.

A chick, dubbed Chick F, was placed in the nest of a newly bonded pair on Tuesday and the webcam was turned on, revealing the female owl, Skalula, has adapted to her unexpected motherhood with ease.

A news release from the breeding program says there are Five bonded pairs and 10 other birds in captivity and Chick F is one of three hatched in April with several more chicks expected this breeding season.

“This is leading up to a record-breaking year in the number of chicks produced by the program,” the release says.

All of the chicks are from eggs provided by a bonded pair, but the eggs were removed, incubated and the chick was fed for 10 days before being returned, either to the original nest or to a foster pair in an effort to kick-start their bonding and breeding.

The eggs are removed because they are very delicate and the program doesn’t want to risk the loss of a single chick, owl specialist Jasmine McCulligh said in a recent interview.

Robotic eggs are left in their place while the real egg is out of the nest and when it’s returned, the owl resumes parenting as if nothing had occurred, McCulligh said.

The centre aims to house a total of 10 bonded, breeding pairs before it begins releasing as many as 20 juvenile owls every year, with the goal of restoring B.C.’s wild population to more than 200 adults over the next 10 to 15 years.

“If all goes well with breeding this year, owls will be released into 300,000 hectares of protected old forests starting as early as next spring,” the release said.

Northern spotted owls once thrived throughout old-growth forests ranging from B.C.’s southern Interior to California. The B.C. Forest Ministry said at one time there were up to 1,000 owls in the province, but habitat loss and competition from the barred owl have reduced the population to less than a dozen.

The breeding centre, launched in 2007, is working with The Fish and Wildlife Compensation Program, a partnership between BC Hydro, the Province of B.C., Fisheries and Oceans Canada, First Nations, and public stakeholders to conserve and enhance fish and wildlife in watersheds impacted by BC Hydro dams.

To see the owl chick: fwcp.ca/owlwebcam