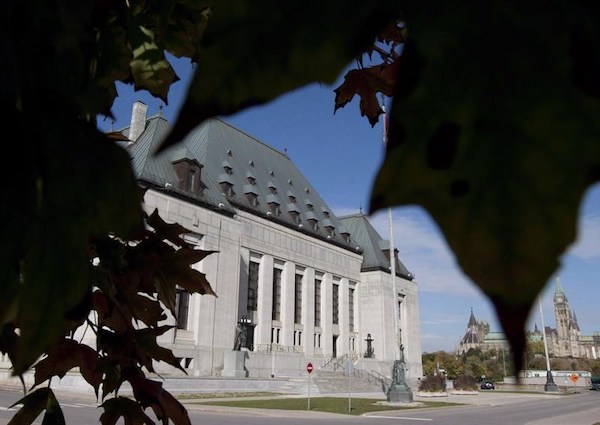 The Supreme Court of Canada is seen in Ottawa on October 2, 2012. (THE CANADIAN PRESS/Adrian Wyld)

OTTAWA — The Supreme Court of Canada plans to visit Winnipeg in September to hear two appeals and meet with Manitobans — the first time the court will sit outside of Ottawa.

The high court says going on the road is part of an effort to make the venerable institution more accessible to the public.

The court plans to hold a large public event in Winnipeg and meet with various groups, including students and members of the Indigenous, francophone and legal communities.

The justices, hosted by the Manitoba Court of Appeal, will hear a criminal-law case from Manitoba on Sept. 25 and a language-rights appeal from British Columbia the following day.

In recent years the Supreme Court has tried to connect more easily with Canadians by embracing social media and issuing plain-language summaries of its decisions.

Last June, Chief Justice Richard Wagner first mentioned the intention to visit Winnipeg and mused that he would love to see the court hold hearings outside of Ottawa from time to time.

In a video announcement Monday, Wagner said it is important for the court to be more accessible to all Canadians, “because the Supreme Court is your court.”

“This will be an opportunity for more Canadians to see the court at work, live, right in front of them. We’re very excited to go to Winnipeg, and to welcome Manitobans into their court.”