Home » Sports » Another Successful Opening Day at the Downs

Another Successful Opening Day at the Downs 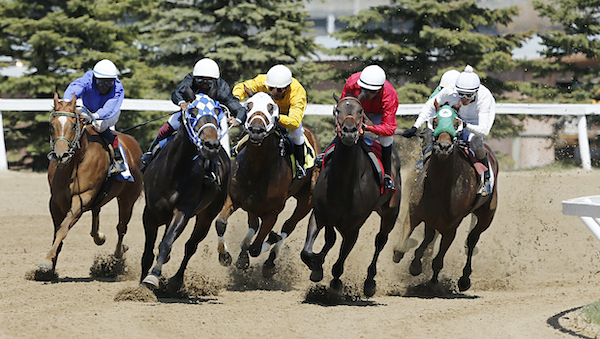 For Assiniboia Downs CEO Darren Dunn, opening day could not have been better.

“Mother Nature cooperated on Mother’s Day to provide us with the perfect landscape to paint an amazing Opening Day picture,” Dunn said enthusiastically. “The jockey colony we assembled this season bore fruit on the track as the competition in the saddle was fierce and many of the races concluded in head-bob photo finishes. And the satisfaction of seeing such a huge crowd lining every corridor of that 1958 building never grows old.”

As more than 10,000 people packed into the old race track on the city’s far West End, the winners on Sunday all had numbers 4 or 6. Of the seven races on Sunday four were won by No. 6 horses while three were won by No. 4 horses. There were also some very nice payouts.

It was also fitting that one of the jockeys who rode two winners on Sunday was Kayla Pizarro. After all, 50 years ago this coming Thursday, Barbara Jo Rubin broke the glass ceiling, becoming the first female jockey to ride at Assiniboia Downs.

A pair of new promotions also created a bit of a buzz. One is a wager called the Jackpot Pick-5 that will likely produce a sizable pot before it is won by someone who has the only correct 20-cent ticket with five consecutive winners. Meanwhile, ASD is also offering what it has dubbed the “ultimate” Chase the Ace game which not only pays out a progressive jackpot to the person who picks an Ace of Diamonds from a dwindling deck of cards, but also has side prizes of $250 for any other ace and $500 for either joker. The game supports Final Furlong, a Manitoba charity that helps find a good home for retired racehorses.

Live racing and the Chase the Ace Jackpot will continue this Friday and Saturday at 7:15 p.m. Then, we’ll race again on Victoria Day Monday at 1:15 p.m.

Meanwhile, on Sunday, the track’s CEO was beaming.

“I’m just thrilled with the opener,” Dunn said. “It was a five-star kickoff to the season. If this is any indication, it’s going to be a great 5-0-day meet.”