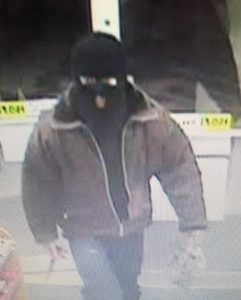 RCMP in Selkirk are looking for this man in connection with two armed robberies on May 11. (RCMP HANDOUT)

RCMP in Selkirk are looking for a suspect or suspects involved in two separate armed robberies on May 11.

The first occurred at a business on Morris Avenue when a man wearing a mask held up a knife and demanded items. He left on a bicycle.

About four hours later the same day, a business on Main Street was also held up by a man wearing a mask and holding a knife. He left the store without taking anything after walking around erratically.

While police say the incidents are similar, it’s unclear if the same suspect is responsible.

The suspect in both robberies is described as male, wearing a black balaclava, 5’5”- 5’9” in height, slim build, and possibly in his 20s or 30s. In the second incident, the suspect is also wearing a brown winter jacket, blue jeans with holes and black shoes.