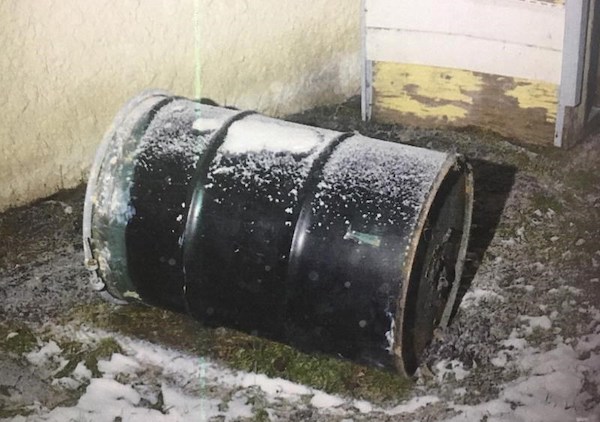 WINNIPEG — One of five women involved with a man accused of killing one of them testified Thursday that the death came after days of the victim being tortured and abused.

“He was beating her up with cords, a hammer, knives,” Jessica Reid, 36, told jurors Thursday at Perez Cleveland’s first-degree murder trial.

Cleveland, 46, has pleaded not guilty to killing 42-year-old Jennifer Barrett, whose body was found in a barrel behind their Winnipeg home in December 2016.

Court heard earlier this week that Cleveland shared the house with his adult daughter and five women described by the Crown as Cleveland’s domestic partners.

Reid testified that Barrett was being kept in the basement of the home that summer, because Cleveland claimed she had been flirting with other men. After a few days of physical abuse, Barrett left the home for a few hours. Things got worse when she returned, Reid said.

Reid testified she was in the basement when she saw Barrett stumble out of the laundry room. It looked like she had a concussion, Reid said, and the woman ended up falling over.

Cleveland used a Taser on Barrett’s leg to try to get her moving, Reid said.

“It didn’t work. I knew something was wrong. I freaked out.”

Reid said she went into the laundry room and there was blood everywhere.

Cleveland moved Barrett’s body into a plastic storage bin in the garage, Reid said. He told her and another woman to deal with it then left to go stay at a hotel.

The stench was awful, Reid said, and they eventually came up with a plan to put the body in a sealed barrel in the backyard.

Reid is charged with being an accessory after the fact, but her case has not yet gone to trial.

Jurors have been told some of the women had been in a romantic relationship with Cleveland for many years when Barrett joined them in 2012.

Reid testified she met him in 2015 when she was buying methamphetamine and their relationship soon turned romantic. When Reid was evicted from her apartment, she moved in with Cleveland and the others.

She said she didn’t leave Cleveland because she was dependent on him for a place to live, for drugs and for money. She was also scared.

“I knew what he would do if he found me.”

The women had roles in the house to cook or clean and were punished when they didn’t follow the rules, Reid said.

One night she woke up to see Cleveland pointing a gun at her, she told court.

Just before Barrett died, Reid said she was locked in the laundry room and tortured for days to teach the other women a lesson.

The abuse worsened after Barrett’s death as Cleveland got increasingly paranoid about the killing being discovered, Reid said. One morning Cleveland, carrying wire and large bolt, came at her with a crazed look in his eye, she said.

“I’m not going to do this anymore. I can’t do this,” she recalled yelling at him before she ran from the house.

She went to a neighbour’s home and called police.