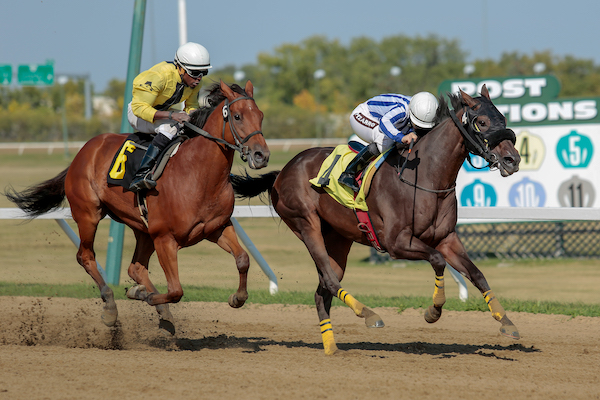 To no one’s surprise, the magnificent Escape Clause was named Manitoba’s 2018 Horse of the Year and Top Manitoba-bred for 2018 at the 35th Annual Manitoba Thoroughbred Awards.

However, while Escape Clause remains in the United States preparing for her huge $700,000 Grade 1 race at New York’s Belmont Park on June 8, the horses she left behind get set for the first weekend of stakes racing at Assiniboia Downs.

Friday night, it’s the Preservata Overnight Stakes as six fillies and mares three-years-old-and-up will run for $18,000. This is a race Escape Clause would have won for fun last year. This year, the second-morning line favourite at 2-1, is Tadaa, a horse that tangled with Escape Clause often in 2018. Tadaa will be ridden by Renaldo Cumberbatch, one of two jockeys to win twice on Opening Day. The even-money favourite in the race is California-bred Tuscany Beauty, trained by Juan Pablo Silva and ridden by the exciting Alex Cruz.

In his first day at the Downs last Sunday, Cruz won the opening race of the 50-day meet aboard Kaufy Buzz and then finished third on Princess Becky and second on Aikman Jewel, all while riding Silva-trained horses. The Preservata should be a dandy on Saturday.

Meanwhile, on Saturday night, three of the most popular horses at the Downs – Gold Cup winner Media Melee, Manitoba Derby champion Plentiful and Claimer of the Year Hot Rodin – will go head-to-head-to-head in the Magic D’Oro Overnight Stakes, a five-furlong sprint for $18,000.

Silva’s Hot Rodin, ridden by Alex Cruz, is the morning-line favourite at 2-1. Hot Rodin won six races at the Downs last year and 10 overall in 2018 and was the biggest winner in North America. Plentiful, trained by Murray Duncan and ridden by Tyrone Nelson is next at 3-1. Alpine Luck, another outstanding sprinter, trained by Jared Brown and ridden by champion jockey Antonio Whitehall is tabbed at 4-1 while Media Melee, trained by Steven Gaskin and ridden by Kayla Pizarro (who also won twice on Opening Day), will go off at 6-1.

On Saturday, it might be fun to arrive early at the Downs for the 144th running of the Preakness Stakes from Pimlico Race Track in Baltimore. The second jewel of the Triple Crown will go to post at 5:48 p.m. CDT and will NOT feature the winner of the Kentucky Derby. Country House has taken a hard pass on the Preakness.

Here is the lineup, with odds, for Saturday’s Preakness Stakes 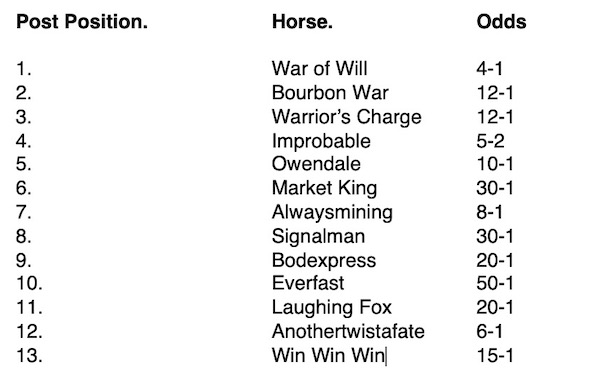 Remember, it’s a big three-day weekend at the track. Live racing continues at 7:15 on Friday night with the Chase the Ace Promotion and the Preservata Stakes. On Saturday, it’s the Preakness Stakes just before 6 p.m. and then live racing at 7:15 p.m. with Chase the Ace and the Magic D’ Oro Stakes. Then, on Victoria Day Holiday Monday, live racing begins with the first post parade at 1:15 p.m. with Chase the Ace and plenty of family fun. There is also $10 buy-in poker on Friday and Saturday night. Registration is at 7:30 and the game begins at 8 p.m.