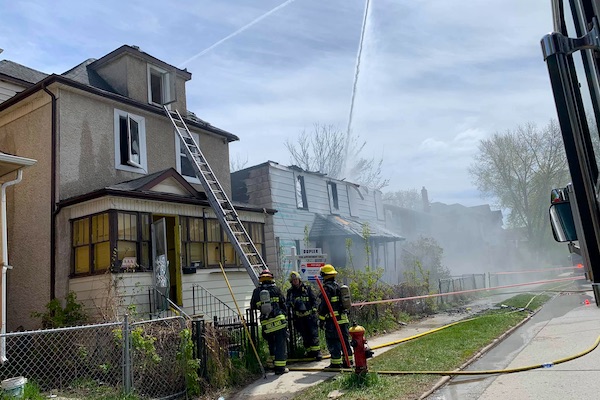 Winnipeg firefighters worked to contain a fire in the 500 block of Young Street Sunday before it could do any further damage to neighbouring properties.

The fire in the vacant two-storey duplex broke out at around 11:20 a.m. and spread to hydro poles in the rear alley, including melting the siding on nearby homes.

Firefighters tried to protect surrounding properties, but the fire managed to extend to the eaves and attic of the home to the north, which suffered extensive smoke, fire and water damage. A third fire was ignited in a nearby house due to embers being blown over by the wind.

Emergency crews evacuated other nearby properties as a precaution. No injuries were reported in any of the fires.

A pet rat was rescued from the second home, according to fire officials.

Power in the area will remain out for several hours as Manitoba Hydro makes repairs to the damaged lines.

The original house is a complete loss and collapsed. The cause remains under investigation and no damage estimates are available.