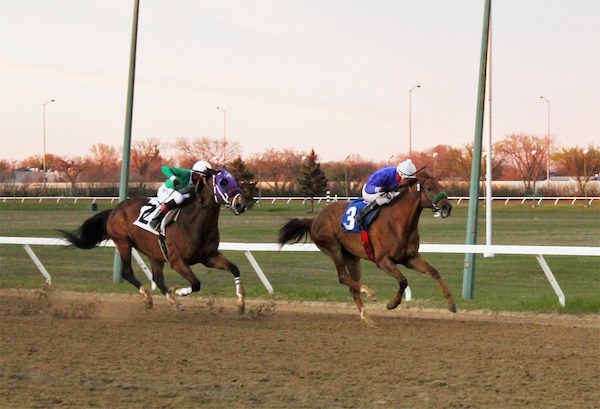 WINNIPEG — It’s hard to imagine that many trainers at Assiniboia Downs have had the kind of weekend Juan Pablo Silva just enjoyed.

After all, when you win the first two Overnight Stakes races of a brand new season, it would be fair to say you off to a good start.

Friday night at the Downs, the veteran trainer who grew up working for his father at Golden Gate Fields in San Francisco, was the man behind the winner, longshot Settle Down Eileen, in the $18,000 Preservata Overnight Stakes. Trained by Silva and ridden by Richard Mairs, Settle Down Eileen paid $22.50, $8.10 and $5.70 in a shocking win over the heavily favoured Tadaa.

It was a great way to start the weekend, but for Silva, it was just the start. On Saturday night, Hot Rodin, a horse that was claimed by Silva last year, won again, taking the $18,000 Magic D’Oro Overnight Stakes. Hot Rodin, Manitoba’s Claimer of the Year in 2018, was ridden to victory by Alex Cruz and paid $4.00, $3.60 and 2.30. The six-year-old gelding won 10 races last year, the most by any horse in North American, and has now won its first start in 2019.

After three days of racing in this year’s 50-day meet, Silva leads all trainers with six wins, two seconds and three third-place finishes in 17 starts. He’s won $56,320 already and with one of the biggest, healthiest and freshest barns at the Downs, there is no telling what Silva can achieve this season.

This is, after all, a man who has done little else but train horses in his life. In fact, he left school at age 13 and went to work in his father, Jose’s barn.

“He taught me the business and taught how to work,” said Silva. “He taught me responsibility and he taught me how to be successful on my own.”

It certainly is a family business for Silva. His wife Yesenia works for him and so do his sons, Pablo Jr., 13, and Michael, 9. His father, brother and uncles are also in the business and if any of his horses claimed, he has a pipeline to more quality horses all over North America.

“We have an outstanding group of trainers at the Downs this year,” said CEO Darren Dunn. “Juan Pablo Silva is a great example of that. His horses are healthy and ready and if he needs to bring in more horses, he’s the guy who can do it. Certainly, when it comes to winning this year’s trainer’s title, Juan Pablo Silva is one of the people to watch.”

On Monday afternoon at the Downs, Silva will have five horses on display, including the two morning line favourites in Race 1, South Americain with Mairs in the irons at 2-1 and Estiqaa with Cruz aboard at 5-2.

He has the favourite in Race 3 with Takahiro’s Dream (Cruz again is the jockey) as well as an intriguing 5-1 entry named Gracie Belle with Paul Francis aboard.

And in Race 5, he’ll send out the 2-1 favourite Aikman Jewel with Cruz in the irons. There is a good chance, Silva will have three more winners on Monday which would give him eight winners for the Victoria Day weekend.

The first race goes to post at 1:30 p.m. on Victoria Day. This could prove to be one of the most successful weekends for a Downs’ trainer in the 62-year history of the track.