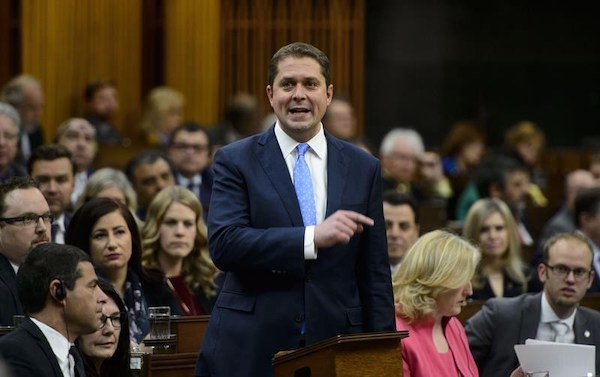 Conservative Leader Andrew Scheer stands during question period in the House of Commons on Parliament Hill in Ottawa on Wednesday, May 8, 2019. (THE CANADIAN PRESS/Sean Kilpatrick)

OTTAWA — Conservative Leader Andrew Scheer is pledging to get tough on crime with mandatory minimum sentences of five years for anyone convicted of abusing children.

Scheer, who made the announcement in a Montreal suburb this morning, says he will ensure sentences for sexual crimes against children take into account the length and severity of abuse.

He says wounds from sexual abuse last a lifetime, adding the penalty should “fit the crime” and that survivors need to be assured the federal government will ensure offenders are appropriately punished.

Scheer has been rolling out a series of policy announcements ahead of the October election as he works to define himself and his party with Canadians.

On Wednesday, he pledged funding for police, survivor services and public awareness to fight human trafficking, adding he will make changes to the Criminal Code to make it easier to convict people accused of it.

He’s also in the middle of a five-speech series to lay out his views on issues such as foreign policy, the economy and the environment.