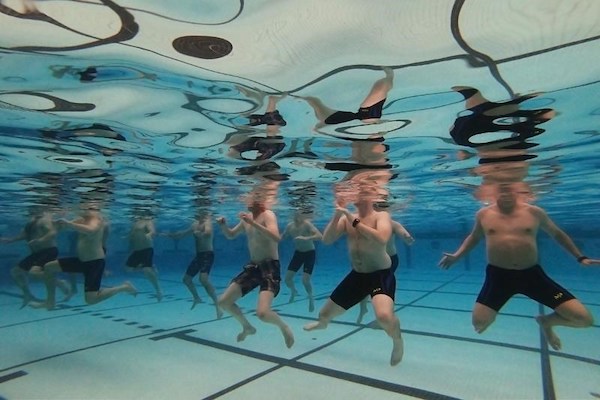 Fathers of members of the Aquatica Synchro Club practice their routine at the Pan Am Pool in Winnipeg Saturday, May 18, 2019. The fathers decided to come together and form the group in support of their daughters’ synchro club. (THE CANADIAN PRESS/John Woods)

WINNIPEG — They stomp their feet along the side of a swimming pool before performing a slightly less than graceful dive.

A few seconds later, their swim-capped heads with clipped noses burst triumphantly from the water, their arms stretched high above their broad shoulders, giant smiles across their stubbled faces.

“It’s actually coming together,” Christian Gosselin says with a laugh. “We are having a lot of fun with it and I think it’s going to be a great show.”

The 10 dads on Manitoba’s only men’s synchronized swimming team have made a major splash since coming together in January to support Winnipeg’s Aquatica Synchro Swim Club. Nine of them have daughters in the club and one is married to the head coach.

Gosselin’s daughters, Chloe, 9, and Calla, 12, are synchronized swimmers and the sport is a big part of his family.

He says he was joking with friends about how he should start a men’s team to better understand the sport. Once the laughs ended, the idea stuck.

He sent an email to all the families involved with the swim club and pitched the idea that dads should form a team to perform at an upcoming anniversary swim gala.

To his surprise, a lot enthusiastically wrote back.

“I still can’t believe it, honestly, that so many said yes,” Gosselin says.

“We want to support the 10th anniversary of the club, support our daughters, try to get more boys in the sport and fundraise at the same time. It kind of started as a joke and ended up being something we had to do.”

“I didn’t know what I was getting myself into,” she says.

It became clear that the fathers were facing a lot of challenges. Many couldn’t perform basic swim skills such as treading water or holding their breath. The nose plugs they borrowed from their daughters weren’t big enough.

Hjartarson says a male’s buoyancy is also different, and, unlike the girls, the men could touch the bottom of the pool in some spots.

But that didn’t stop the determined dads. By their second practice, they were attempting lifts. It was entertaining to watch, but “it wasn’t super successful,” she says.

Each week the men continued to meet for practice. Over time, their skills developed. Their timing improved, breathing became easier and the excitement increased.

“They are actually starting to look impressive — a little bit,” Hjartarson says, looking out proudly on the dads at a recent practice at Pan Am Pool.

Todd Neumann has one daughter in synchronized swimming and two more set to join. The men’s team gave him a whole new respect for his daughter, he says, especially since her routines are much more difficult.

“I considered myself a good swimmer until I jumped into that pool. It is intense. Out of all the sports I’ve done, it’s the hardest training I’ve had to do.”

Word of the team has spread. Its performance at the swim gala on Saturday is to be recorded and broadcast at an Artistic Swimming world series event in Quebec City at the end of the month.

Synchronized swimming was seen as a women’s sport for a long time. Its international governing body, FINA, only started to allow men to compete in the world championships in 2015.

Hjartarson says she hopes the tide is changing and more boys will dive in, especially since she has one son, and another on the way.

“We are breaking some of those stereotypes now to make that path easier for them in the future.”