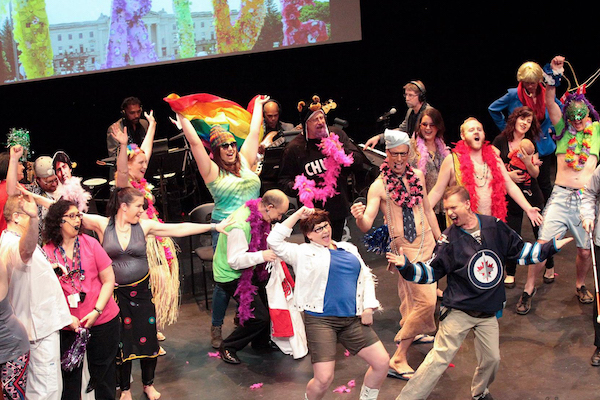 After 85 years, the BS Comedy Players are taking their final bow.

The BS Winnipeg comedy troupe, short for “beer and skits,” will hit the stage for the final time June 6-7.

“We want to go out with a bang, and this year’s show will be the be-all, end-all — literally.”

Completely locally written and produced, the show takes a look at local, national and international politics and society along with send-ups of popular songs performed with live bands and dance numbers. The event was started by the Winnipeg Press Club in 1934.

This year’s sketches include a city hall heist, a farcical look at the intrigue on Parliament Hill and, in the spirit of epic finales, a send-up of M*A*S*H with a Manitoba twist!

Lara Rae, a fixture in Winnipeg’s comedy scene, will emcee both acts of the show.

And while it may be a gloomy day for fans of the BS Comedy Players, the ending doesn’t necessarily mark the end of BS. Organizers say troupe members will look at the future of the organization at their annual general meeting later this year.

Tickets are available for $35 or 10 for $300 by calling (204) 339-6317 or online at bscomedy.com. A student rate of $20 per ticket is also available for the Thursday night show. All shows are performed at Prairie Theatre Exchange, located on the third floor of Portage Place.