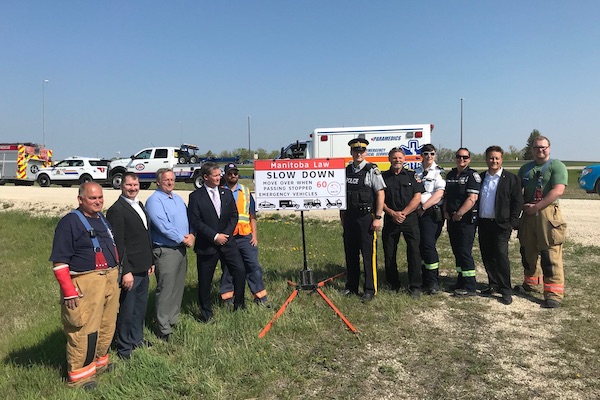 Officials stand next to a new ‘Slow Down, Move Over’ sign in Headingley on Wednesday, May 29, 2019. (@CAAMANITOBA / TWITTER)

Motorists will be seeing new roadside signs on Manitoba highways reminding them to slow down and move over while passing emergency vehicles.

The signage is part of the province’s new ‘Slow Down, Move Over’ campaign, making drivers aware of the law requiring them to ease up on the gas while approaching roadside emergency scenes and police activity.

“We have heard from first responders, including the RCMP, rural ambulance and fire services, as well as the tow-truck industry and motor carrier enforcement officers, that motorists need to slow down and safely move over to give response crews a safe space to do their jobs, which are often life-saving jobs,” said Infrastructure Minister Ron Schuler.

“This is a matter of safety, common sense and courtesy, yet we hear of near misses and recklessness far too often.”

The signs can be installed by municipalities on busy rural roads and will also be used on major routes entering Manitoba and departing major centres.