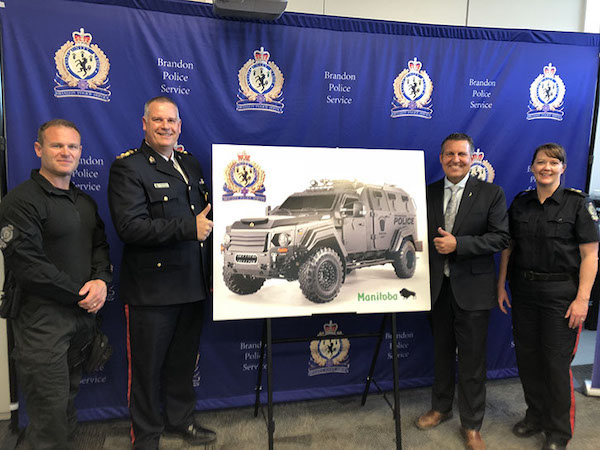 Justice Minister Cliff Cullen (second from right) and Chief Wayne Balcaen of the Brandon Police Service (BPS) pose next to a rendering of an armoured rescue vehicle that will be purchased by BPS to ensure safe tactical responses to critical incidents in southwestern Manitoba. Minister Cullen was also joined by Sgt. Kirby Sararas (right) and Const. Jeff Hoad (far left). (GOV.MB.CA)

An armoured rescue vehicle, or ARV for short, will be roaming the streets of Brandon soon as part of a $400,000 investment by the province.

Justice Minister Cliff Cullen made the announcement Friday in Brandon, saying the vehicle will give law enforcement the tools they need to respond to threats in the community safely.

The ARV is the second such vehicle for a police service in the province. Winnipeg police received their own in 2016 at a cost of $343,000, now known as ARV1.

“The new rescue vehicle will greatly enhance safety for citizens and officers throughout our region,” said Brandon Mayor Rick Chrest.

The ARV is equipped with ballistic armour and has the capacity to carry up to 10 fully equipped members for deployment or training.

Cullen also announced $80,000 for Community Mobilization Westman, which brings social service professionals together twice a week to sit at a ‘HUB table’ where individuals or families at risk are connected to supports and services proactively.

← Previous: 'Praying to God:' Man Sings Gospel as He Watches His Home Burn in Alberta Fire Next: Jackman-Atkinson: 'I Am Not for Quotation or Attribution' →
Tags: Brandon | Crime | Manitoba