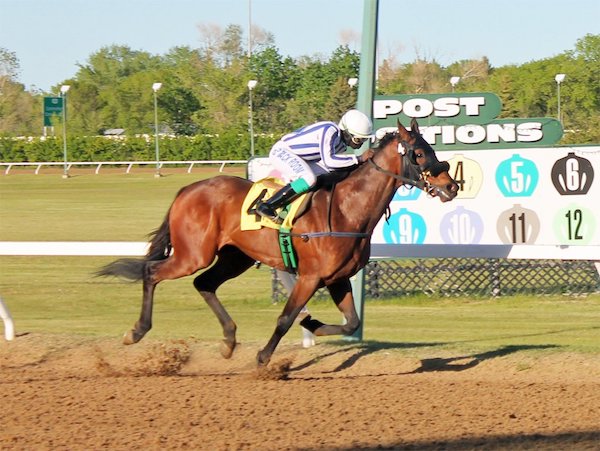 So far this season, the combination of trainer Juan Pablo Silva and rider Alex Cruz has run roughshod over the competition at Assiniboia Downs.

However, on Saturday night, in the first major stakes race of the 2019 meet, it was the duo of Steven Gaskin and Dane Dawkins that stole the show.

Ryder’s Quest, bred in Manitoba and owned by Larry Falloon, John Ganas and Steven Gaskin, trained by Steven Gaskin and ridden by Dane Dawkins, won the $25,000 Frank Arnason Sire Stakes in a duel with Ivory Classic.

It was a strange race. Only four horses were entered, which meant it should have been an easy win for 2-5 morning line favourite Silquest. However, the Shelley Brown-trained Silquest never really got his legs under him and after giving way on the turn for home was no longer a factor. Meanwhile, at 10-1, Fonzarella had a problem at the starting gate, broke a step slow and remained dead last for the entire race.

That left Ryder’s Quest and 7-1 Ivory Classic in a two-horse duel down the stretch in the six-furlong sprint. Ryder’s Quest stalked outside, challenged in the middle of the turn for home, took over late in the turn, opened up a lead and held nicely as the rookie-rider Dawkins won his second race at the Downs.

With the win, Silva widened his lead in the trainer’s standings., He now has 14 wins, six seconds, eight thirds and $128,071 in earnings in 45 starts. Three-time champion Tom Gardipy Jr. is next with 10 wins, six seconds, seven thirds and $89,015 in winnings through his first 48 starts. Defending champion Jerry Gourneau is third with six wins, 11 seconds and seven thirds with $74,747 in earnings in a track-high 63 starts.

Rookie Dane Dawkins now has two wins, one second and five thirds to go with $33,872 in winnings after just 18 starts.

And don’t forget, this Saturday, June 8, it’s Belmont Stakes Day from Belmont Park in Elmont, N.Y. It will be the 151st running of the final jewel of racing’s Triple Crown and while there will be no Triple Crown winner this year, it is a very big day for Manitoba racing.

The 51st running of the Grade 1 $700,000 Ogden Phipps Handicap, on the undercard at Belmont Park this Saturday, will feature Manitoba-bred mare — the darling of Assiniboia Downs — Escape Clause. This race, over 1 1/16ths of a mile on dirt, is a Breeder’s Cup Series “Win and You’re In Race” for the 2019 Breeder’s Cup Longines Distaff.

The $2 million (US) Breeder’s Cup Longines Distaff, which will be held Nov. 2, at Santa Anita Park just outside Los Angeles, will be run over a mile and an eighth and will feature the greatest older mares on the planet. A Manitoba-bred thoroughbred has never been close to qualifying.

The Ogden Phipps will be the toughest race Escape Clause has ever entered. She will face Midnight Bisou, the current favourite in the Breeder’s Cup Distaff and the mare who beat Escape Clause by a lip in the 2019 Grade 1 Apple Blossom Handicap at Oaklawn in April. Also expected to race is Come Dancing, the winner of the 2019 Grade 2 Ruffian Stakes.

The Ogden Phipps Handicap will go to post at approximately 3 p.m. CDT and you can watch and wager on the race at Assiniboia Downs. If the fans are anything like they were for the Apple Blossom, the Clubhouse at the Downs will be loud.