Home » The Canadian Press » Killing, Violence Toward Indigenous Women, Girls ‘Not a Relic of Our Past’: PM

Killing, Violence Toward Indigenous Women, Girls ‘Not a Relic of Our Past’: PM 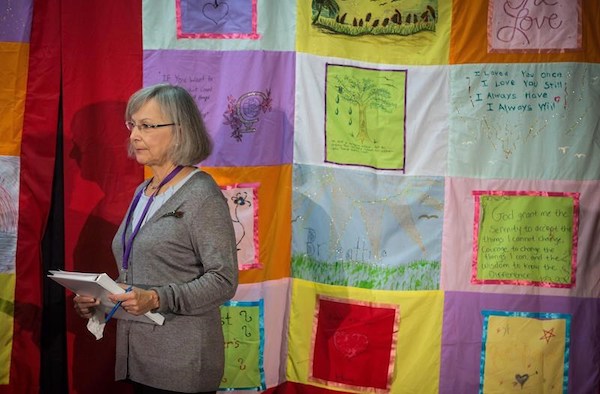 Chief commissioner Marion Buller listens before the start of hearings at the National Inquiry into Missing and Murdered Indigenous Women and Girls, in Smithers, B.C., on September 26, 2017. (THE CANADIAN PRESS/Darryl Dyck)

GATINEAU, Que. — Prime Minister Justin Trudeau stopped short of calling the disappearances and deaths of Indigenous women and girls in Canada a genocide on Monday — despite being called upon to do so — when he spoke after accepting the report of the national public inquiry he called on the issue.

Instead, Trudeau said violence against Indigenous women and girls is “not a relic of Canada’s past,” but part of its present, and the justice system has failed them.

“To this day, the safety, security, and dignity of Indigenous mothers, daughters, sisters, and friends are routinely threatened,” he said. “Time and again, we have heard of their disappearance, violence, or even death being labelled low priority or ignored.”

The inquiry report uses the term genocide dozens of times, starting in the first paragraph of its preface: “This report is about deliberate race, identity and gender-based genocide,” chief commissioner Marion Buller writes.

Other commissioners pointedly use the word and the report devotes pages to developing the argument that the deaths of Indigenous women and the generations-long suppression of their rights and cultures is genocidal.

Trudeau said his government will thoroughly review of the report and will develop and implement a national plan to address violence against Indigenous women, girls, and LGBTQ and two-spirit people.

The prime minister received the inquiry report containing more than 200 recommendations in Gatineau, Que. morning from the four commissioners after they performed a traditional ceremony, including coating its pages with medicine and wrapping it in a blanket.

After Monday’s ceremony, Buller said the commission does not need to hear the word “genocide” out of Trudeau’s mouth; it heard the truth from families and survivors.

That Indigenous women and girls have been victims of genocide was an “inescapable conclusion” for the commission, she said.

When asked if she agreed with the use of the term, Crown-Indigenous Relations Minister Carolyn Bennett said the Liberal government accepts the findings of the commissioners, adding it has heard for a long time that “racism and sexism kills.”

Colonial practices have killed not only women and girls but boys and men, she said, and the government’s job now is to develop a plan.

The federal government will leave the discussion of the use of the term “genocide” to academics and experts, said Justice Minister David Lametti, adding it has a responsibility to the families and survivors to fix the problem.

Earlier Monday, Buller told the crowd she and her three fellow commissioners are holding up a mirror to the country, reflecting what they heard from more than 2,300 people over two years of cross-country public hearings and work to gather evidence.

A complete change is required to dismantle colonialism in Canadian society, added Buller, who is Cree from the Mistawasis First Nation in Saskatchewan.

“This paradigm-shift must come from all levels of government and public institutions,” she said. “Ideologies and instruments of colonialism, racism and misogyny, both past and present, must be rejected.”

Commissioner Qajaq Robinson said the inquiry tested her to her core as a non-Indigenous person, struggling to come to terms with her “role in Canada’s genocide.”

Robinson was born and raised in Nunavut, speaks Inuktitut and practises Aboriginal law, but her appointment as a member of a commission that had no Inuk member was controversial.

“Shame, guilt, denial, that urge to say, ‘No, no, no, that’s not what this is,’ ” she said. “But it’s the truth. It’s our truth. It’s my truth, it’s your truth. The families, survivors, and Indigenous peoples across this country have brought this truth to light.”

The report, the culmination of a three-year effort often beset by controversy, delays and personnel problems, documents what Buller calls “important truths” — including that Canadian laws and institutions are themselves to blame for violating the human rights of Indigenous Peoples.

“Skeptics will be fearful and will complain that the financial cost of rebuilding is too great, that enough has been done, that enough money has been spent,” she writes.

“To them I say, we as a nation cannot afford not to rebuild. Otherwise, we all knowingly enable the continuation of genocide in our own country.”

The report’s 231 recommendations — framed as “calls for justice” — include developing an effective response to human-trafficking cases and sexual exploitation and violence, including in the sex industry.

These moves are not optional, but constitute legal imperatives, the report says.

The report also focuses on the need for actors in the justice system and in police services to acknowledge that the historical and current relationship with Indigenous women, girls, and two-spirit people has been largely defined by “colonialism, racism, bias, discrimination, and fundamental cultural and societal differences.”

Missing and murdered Indigenous women are believed to number in the thousands in Canada, but the report says that despite the commission’s best efforts to quantify the extent of the tragedy, “no one knows an exact number.”

In 2005, the Native Women’s Association of Canada created a database tracking cases and produced a 2010 report documenting 582 missing and murdered Indigenous women. In 2014, the RCMP released a national overview and pegged the number of cases between 1980 and 2012 at nearly 1,200. Other unverified estimates are far higher.

Responding to the conclusions is the responsibility not only of federal and provincial governments and law enforcement agencies, but all Canadians in both the immediate and long-term, the report says.

“Individuals, institutions, and governments can all play a part … We encourage you, as you read these recommendations, to understand and, most importantly, to act on yours.”