By Kelly Geraldine Malone and Amy Smart, The Canadian Press 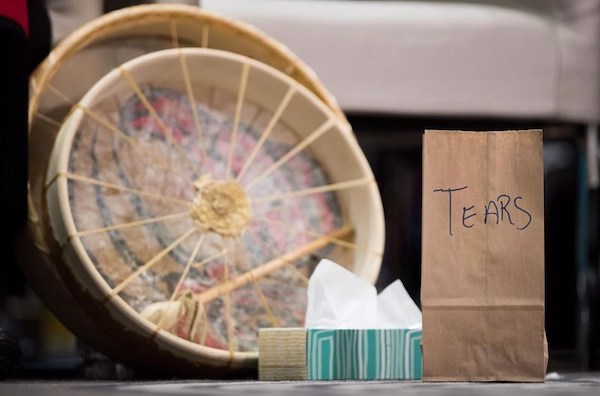 A paper bag used to collect the tears of those testifying, to then be burned in a sacred fire, is seen at the final day of hearings at the National Inquiry into Missing and Murdered Indigenous Women and Girls, in Richmond, B.C., on Sunday, April 8, 2018. (THE CANADIAN PRESS/Darryl Dyck)

Anita Ross knew the release of a report into missing and murdered Indigenous women and girls would roil up difficult feelings about the untimely death of her teenage daughter, but she hopes opening those wounds will ensure that her other children and grandchildren will be safe.

“Everyday all I wish for is justice for my daughter,” she said.

Indigenous women and families across the country watched as the national inquiry’s final report was released during a ceremony and news conference in Gatineau, Que., on Monday. Many said there would only be justice if sharing their stories led to real change.

Ross said she felt a sense of relief reading through the 231 recommendations, which are framed as “calls for justice” in the report.

She wanted to go to the ceremony but was disappointed to learn there were no funds to help families travel there.

Ross was the first witness to testify when hearings were held in Thunder Bay, Ont. She described her daughter as loving, patient and artistic. Ross said she was devastated when Delaine’s body was found in Lake of the Woods.

A coroner said there was no evidence of foul play. Ross doesn’t believe her daughter’s death was investigated properly.

She was disappointed Delaine’s name and those of other Indigenous women and girls who have disappeared or lost their lives were not front and centre.

“Basically, they are missing from that report.”

Smith’s 21-year-old sister, Claudette Priscilla June Osborne-Tyo, vanished from Winnipeg in 2008. The family had received a voice message in which Osborne-Tyo explained she was with a man she didn’t know at a motel and was afraid. Police were quickly called, but the case wasn’t investigated for 10 days, Smith said.

Every government, community, organization and citizen has a role to play in ensuring Indigenous women and girls are safe, said Hilda Anderson-Pyrz, who works with families of missing or murdered relatives from northern Manitoba First Nations.

Indigenous people already knew much of the information in the report, she said. Her sister also died under questionable circumstances.

“We can no longer have inaction, because each day there’s inaction, we are losing an Indigenous woman or girl across this country,” Anderson-Pyrz said. “As a Canadian, everyone has a responsibility to be part of that solution.”

Women and families in Vancouver shared stories of their loved ones during a gathering for the report’s release. Lorelei Williams’s aunt, Belinda Williams, has been missing for more than 40 years, and the DNA of her cousin, Tanya Holyk, was found on serial killer Robert Pickton’s farm.

“Today is an emotional day for me,” she said through tears. “So many of us family members fought for this national inquiry. Some of it was good; some of it was bad. Some families couldn’t even testify. It was just too hard.”

Melanie Mark, a First Nations woman elected to the British Columbia legislature, sat with her eight-year-old daughter during the report’s release. Mark, feeling a sense of loss, couldn’t sleep the night before because she knew the report would reopen wounds for families across the country.

“We have to acknowledge the trauma people are feeling in this community is really heavy,” she said.

“But I have a sense of hope. I feel like I have no choice but to believe things are going to get better.”