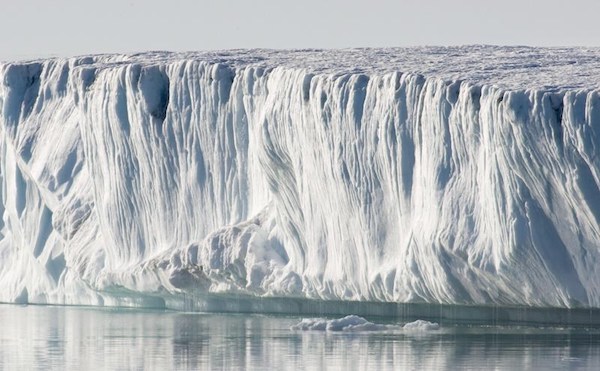 Ice is seen in Baffin Bay above the Arctic circle from the Canadian Coast Guard icebreaker Louis S. St-Laurent, Thursday, July 10, 2008. Climate change affects all parts of life in the North and any plan to do deal with it must be just as wide-ranging, says a strategy document to be released Friday by Canada’s Inuit. (THE CANADIAN PRESS/Jonathan Hayward)

INUVIK, N.W.T. — Climate change affects all parts of life in the North and any plan to deal with it must be just as wide-ranging, says a strategy document released Friday by Canada’s Inuit.

“This is something that isn’t just a policy area for us,” said Natan Obed, head of Inuit Tapiriit Kanatami, which wrote the strategy. “It also is a life-and-death situation for people who are still inextricably linked to the environment.”

The Arctic is warming twice as quickly as the rest of the planet and that means the Inuit need their own plan to deal with it, Obed said.

Accompanied by federal Environment Minister Catherine McKenna in Inuvik, N.W.T., Obed released a 48-page outline that says climate change can’t be tackled without addressing many of the other problems Inuit face.

“We have often been seen as the canary in the coal mine, often brought forward to tell the world about how the Arctic is changing, but that’s usually where it ends,” Obed said in an interview before the plan was made public.

“Inuit have decided we are going to seek a partnership with the government of Canada and start to adapt any way we can through co-ordinated action.”

McKenna, who promised an initial million-dollar contribution to implement the plan, agrees Inuit need their own approach.

“You don’t want climate policy for Inuit being designed in Ottawa,” she said.

The plan deals with much more than melting sea ice. It calls for renewed infrastructure — from civic buildings to airstrips to waste facilities — that is threatened by permafrost melt. It also recommends turning away from aging, carbon-intensive diesel generators that power northern communities.

It insists climate change amplifies social problems and can’t be considered apart from them.

“The climate risks we face compound the social and economic inequities we have endured for generations,” the document says.

“It is everything from health and well-being to food to infrastructure to energy. And that is a much smarter way of going to tackle a really challenging problem.”

The plan includes specific recommendations to reform building codes and practices in the North to incorporate Inuit knowledge. It also calls for spending on air and marine transport and improved telecommunications.

It asks for power utilities, designed and controlled by Inuit, that build on renewable energy such as hydro, solar and wind. It says more research is needed into sustainable energy practical for the Arctic and extra funding is needed for energy-efficient housing.

Hunters should be supported to ease food insecurity and increase safety of those travelling on the changing landscape, the plan suggests.

It would take at least a decade to follow through on all the plan’s recommendations, Obed said. But some items are more pressing.

“The infrastructure needs and the (housing) retrofits are definitely going to be needed in the coming years. Those investments are going to cost a lot of money.”

McKenna said the government is aware of the need, but she wouldn’t make any promises.

“Clearly, there are broader needs in terms of infrastructure and getting communities off diesel,” she said. “We need to look at these investments and we need to look at the health and well-being of Inuit economic prosperity through a climate lens as well.”

— By Bob Weber in Edmonton.