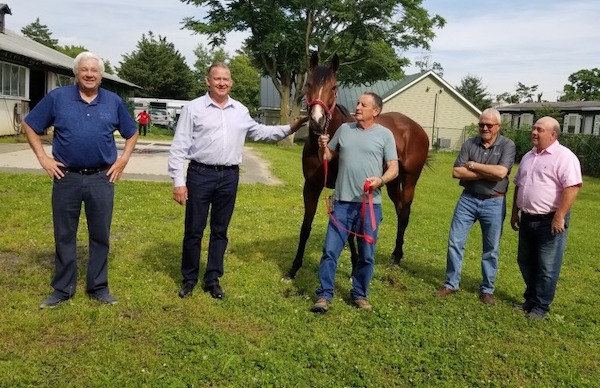 It was not so great for Manitoba’s own Escape Clause.

While the teams of Cumberbatch and Nault, Pizarro and Keplin and Mairs and Silva all combined to win $30,000 stakes races at Assiniboia Downs this weekend, Manitoba’s magnificent five-year-old mare Escape Clause went into New York City and got taught a lesson by two of the finest mares on the planet.

Racing in the $700,000 Grade 1 Ogden Phipps Handicap at Belmont Park, on the fabulous undercard of Belmont Stakes Saturday, Escape Clause started well, sat in second place for most of the race and then, at the final turn, the big girls took over. As she stepped into the stretch, she got caught between, Midnight Bisou and Mopotism, was bumped and rider Tyler Baze couldn’t find an opening as Midnight Bisou took control. At that point, Escape Clause had nothing left in the tank and the favourite Midnight Bisou won handily, as expected, followed by Come Dancing and then the Doug O’Neill-trained Mopotism.

However, what happens next is anyone’s guess. Trainer Schnell is expected to take her back to Canterbury Downs where she could certainly run quite successfully. Or, he could take advantage of a number of offers that are still out there and continue to race her all over the United States. She’s still a long way from the farm.

Meanwhile, back in Winnipeg, it was a Stakes Weekend with three major events on Friday and Saturday night.

On Friday night, Settle Down Eileen with Richard Mairs aboard won the $30,000 LaVerendrye Stakes for fillies and mares, three-years-old and up over six furlongs. Trainer Juan Pablo Silva got the win, his meet-leading 15th of the season.

Then on Saturday, there were two big races. Hidden Grace with Renaldo Cumberbatch in the irons won the $30,000 Hazel Wright Sire Stakes for three-year-old fillies. Hidden Grace, trained by Michael Nault, is starting to look like the early favourite for the Manitoba Oaks.

And later on Saturday night, Louden’s Gray with Kayla Pizarro aboard won the $30,000 Free Press Stakes for trainer Steve Keplin. The FP is a six-furlong sprint for older horses.

It was a big weekend for last year’s champion rider Antonio Whitehall who won three races on Friday night and one on Saturday. Pizarro won twice on Saturday night as did Stanley Chadee Jr., who went back-to-back.

It’s a big week coming up. There is no racing on Wednesday night this week, but there is racing on Friday and Saturday evening (7:15 p.m.) and Sunday afternoon. Racing Sunday begins at 1:15 p.m.