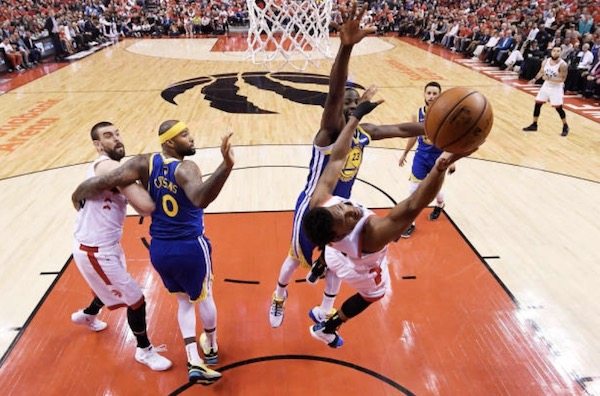 Kyle Lowry #7 of the Toronto Raptors attempts a shot against Draymond Green #23 of the Golden State Warriors during Game Five of the 2019 NBA Finals at Scotiabank Arena on June 10, 2019 in Toronto, Canada. (KYLE TERADA / GETTY IMAGES)

Basketball fans can feel like they’re part of the action in Jurassic Park as Bell MTS Place will host a viewing party for game six of the NBA Finals on Thursday.

The Toronto Raptors are one game away from winning the championship as they continue their battle against the Golden State Warriors. Toronto leads the series 3-2.

A game seven viewing party will also take place if the Raptors do not win game six.

Admission is free and fans are encouraged to bring a tin for the bin in support of Winnipeg Harvest.