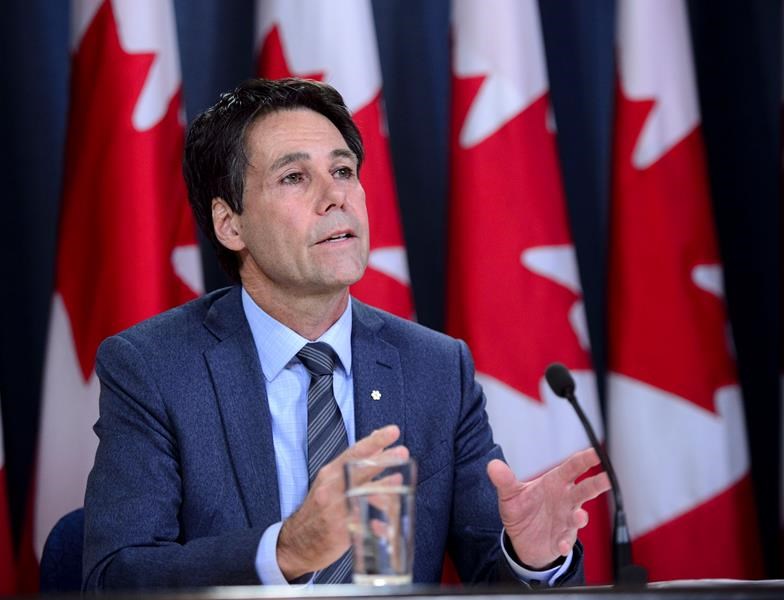 Dr. Eric Hoskins, Chair of the Advisory Council on the Implementation of National Pharmacare, speaks during a press conference at the National Press Theatre in Ottawa on Wednesday, June 12, 2019. (THE CANADIAN PRESS/Sean Kilpatrick)

OTTAWA — Canada’s governments have to work together to transform, rather than tinker with, a patchwork of prescription-drug plans to create a public plan for every Canadian, says the chair of the expert panel the federal Liberals named to advise them how to create a national pharmacare system.

The patchwork should be replaced by a pharmacare system much like the public health-care system, with standards set by the federal government and supported by federal funding, but administered by provincial and territorial governments, the panel said in its final report Wednesday. Individuals should still be able to get supplemental drug insurance, either on their own or through workplace benefits programs.

Dr. Eric Hoskins, Ontario’s health minister under the previous provincial Liberal government, released his council’s findings in Ottawa. The group reported that such a plan will result in savings of an estimated $5 billion annually, an average of $350 per year for each family.

Canadians spent $34 billion on prescription medicines in 2018, the report says, adding drugs are the second-biggest expenditure in health care after hospitals. The cost is growing, as well, as people live longer with chronic conditions that require medication.

“We spend even more on drugs than on doctors,” the panel report says. “On a per-capita basis, only the United States and Switzerland pay more for prescription drugs. Yet for all that spending, there are huge gaps in coverage.”

It is a good time to show courage and do some “nation-building,” Hoskins said at a press conference as he put forward his plan, adding the price of doing nothing is too high.

Canada has a variety of drug plans administered by provinces, mainly for children, seniors and people on social assistance. Other plans managed by the federal government cover other groups, such as Indigenous people and members of the military, while private insurance fills the gaps for some.

Hoskins’ panel recommended Wednesday that a new drug agency be responsible for developing a national list of prescription drugs, known as a formulary, beginning with common or so-called essential medicines by Jan. 1, 2022. It also suggests the initial formulary expand to a “fully comprehensive formulary” no later than Jan. 1, 2027. Each government with its own smaller drug-coverage programs now does this for itself.

Speaking outside the House of Commons on Wednesday, Health Minister Ginette Petitpas Taylor said she would review the recommendations and pledged to work with provinces, territories, stakeholders and partners as Ottawa considers next steps.

One of the key questions is money.

The report calls for the federal government to work with the provincial and territorial governments to begin to implement national pharmacare as soon as possible, with a new financing agreement to be developed jointly and with Ottawa paying the additional costs governments would take on.

Hoskins’ report estimated that annual incremental costs will reach $15.3 billion in 2027. The advisory council recognizes the “very significant fiscal implications” but stressed “the issue is too important to ignore.”

The federal government also recognizes funding is going to have to be part of the equation, Petitpas Taylor said Wednesday, and it doesn’t expect provinces to foot the bill.

In response to the report, Conservative Leader Andrew Scheer took aim at Hoskins as a former minister in Kathleen Wynne’s government in Ontario.

“Justin Trudeau hired someone from a disastrous provincial Liberal government that spent Ontario into the ground with unsustainable rates of spending growth,” he said. “They hired that person to design a federal program. You will excuse me if I have zero confidence in their ability to manage this.”

For its part, the federal NDP urged the Liberals to act on implementation.

“People throughout the country are having a hard time paying for their medication,” said NDP Leader Jagmeet Singh in a statement.

“Dr. Hoskins and the advisory council have come to the same conclusion as every other expert panel and study done on the subject: prescription-drug coverage should be integrated into our public health-care system to cover everyone.”

It says those living with disabilities, people on social assistance and low-income seniors should be exempt from these fees.

In its last budget, the Liberal government pledged to create a new agency to buy drugs in bulk and cut Canadian medication costs as the first step toward a national drug plan.

It said it intends to work with provinces, territories and other partners to develop the mandate for the agency, with Health Canada to receive $35 million over four years starting in 2019-2020 to create an office to support the plan. It also promised to spend $500 million a year beginning in 2022 on subsidizing drugs that treat rare diseases.