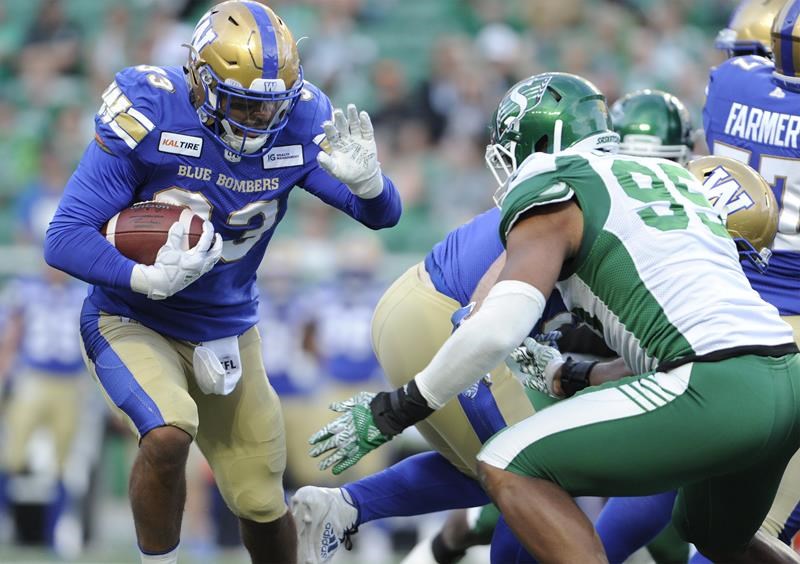 Winnipeg Blue Bombers running back Andrew Harris picks up yards during first half CFL pre-season action at Mosaic Stadium in Regina on June 6, 2019. Andrew Harris has the opportunity to make Blue Bombers history this season. The all-star running back enters his 10th CFL season on the heels of consecutive league rushing titles. No Winnipeg tailback has ever claimed three straight. (THE CANADIAN PRESS/Mark Taylor)

WINNIPEG — Andrew Harris has the opportunity to make Blue Bombers history this season.

The all-star running back enters his 10th CFL season on the heels of consecutive league rushing titles. No Winnipeg tailback has ever claimed three straight.

“I had no idea about that stat,” Harris said after Tuesday’s practice when asked about the rare trio of titles. “For me, it’s honestly just about contributing to the team in the best way to help the team win.

“If that means rushing the ball a bunch of times to receive the rushing title and that comes along the way, then so be it. Obviously it’s a goal, but it’s not something that’s make-or-break for myself or something that I’ll be upset about if it doesn’t happen.”

The 32-year-old Harris and the Bombers open their CFL season on Saturday on the road against the B.C. Lions.

Harris joined his hometown club in 2016 after six seasons with B.C. The change of scenery ignited him into becoming a dual threat.

The last player from any team to win three rushing titles in a row was Calgary’s Canadian tailback Jon Cornish from 2012-14. Saskatchewan’s George Reed holds the consecutive record with five from 1965-69. Montreal’s Mike Pringle won four straight from 1997-2000.

While Harris is primed to help the Blue Bombers end their 28-year Grey Cup drought, the team’s offensive line is facing manpower challenges that could impact performance.

All-star centre Matthias Goosen retired to become a police officer in B.C., while guard Sukh Chungh signed as a free agent with his home province Lions.

Injury problems also surfaced for the offensive line during training camp as veteran guard Patrick Neufeld didn’t practise at all because of an undisclosed injury.

Aside from being the horses who block for Harris, the unit is also tasked with giving quarterback Matt Nichols time to throw and keeping him upright.

“Guys have stepped in, did a great job,” Nichols said. “We have enough veteran guys still in there that if someone does make a wrong call or is unsure, we have those veterans guys in there that get everyone on the same page.”

Nichols has been at the helm as the Bombers reached the playoffs in each of the past three years and he wants to hoist the Grey Cup in his fifth season wearing blue and gold.

“I think that we have the talent to be better than we were last year,” Nichols said. “All that’s fun to talk about, but we need to go out and play good on game day, week in and week out, and put ourselves in the position we want to be in.”

The secondary needed holes plugged after veteran cornerback Chris Randle was released and signed with Ottawa. All-star safety Taylor Loffler left for Montreal and Kevin Fogg was signed by Toronto.

WINNIPEG BLUE BOMBERS AT A GLANCE

KEY PLAYERS: QB Matt Nichols. The 32-year-old pivot adjusted his diet and workout routine in the off-season to improve his mobility and overall health.

WR Chris Matthews. The 2012 CFL most outstanding rookie is back where it started. He joined Calgary late last season after four seasons in the NFL. His six-foot-five frame should be a favourite target for Nichols.

DL Willie Jefferson: The six-foot-seven, two-time CFL all-star was a key free-agent acquisition who could give Winnipeg a dominant duo off the edge with Jackson Jeffcoat.

THE BIGGEST QUESTION: Can a revamped offensive line protect Nichols and open holes for Harris?