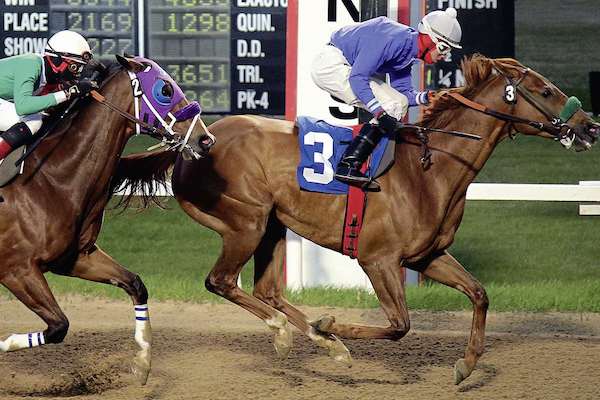 Despite finishing fourth in her big race in the Big Apple, Escape Clause still has loads of upside.

And for her owners, the biggest would be the fact that she is now the highest-earning Manitoba-bred in the storied history of thoroughbred racing in our province.

That number breaks the previous mark of $670,092 that was held by the gelding Fancy As, that raced from 2000-2007. Obviously, that makes Don Schnell, Barry Arnason and True North Racing very happy.

And just as aside, Cam Ziprick and Barry Arnason, the breeders of Escape Clause, have been named top breeders in Canada for 2018 by the Thoroughbred Owners and Breeders Association (TOBA) in Lexington, Ky, and have been invited to accept their award at the TOBA Awards Dinner in September.

In the meantime, despite that fourth-place finish, Escape Clause still has plenty of options. Granted, she is all but eliminated from Breeder’s Cup consideration and likely won’t face Grade 1 competition again, but she will race on July 13 in the Delaware Handicap at Delaware Park, just south of Wilmington.

The Delaware Handicap is a Grade II race for fillies and mares, three-years-old-and-up over a mile and a quarter. It also boasts a purse of $750,000, making it the largest purse that Escape Clause has chased to date (the Phipps and Apple Blossom were both $700,000 races). And she’ll have no travel woes. As invitee of the Delaware Park board, she’ll now stable at Delaware Park and prepare, on-track, for her next big race.

While she won’t get to the Breeder’s Cup, she now has a good shot at becoming Manitoba’s first $1 million thoroughbred. And nobody in the racing business ever said there was something wrong with winning money.

And local punters will get that chance three times at Assiniboia Downs this weekend. There will be racing on Friday and Saturday night and also on Father’s Day, Sunday afternoon.

“For the first and only time this live race season we will race on three consecutive days,” said Downs CEO Darren Dunn. “The horsemen have stepped up with entries, including a fantastic full-field race card on Sunday. And, as it is Father’s Day, we will put the spotlight on Dad with additional contests, prize draws and a fantastic bar-b-que rib special that fits perfectly with the afternoon event.”

On Saturday night, Race 1 is a $14,000 Allowance featuring another heavy favourite, Langara. A six-year-old gelding, Langara is trained by Michael Nault and ridden by last year’s jockey champion Antonio Whitehall. Lanagar will face four other well-known geldings — Yesitsmejohnny G, Delvecchio, True Kommando and Outlandos. It should be a great way to start a Saturday night of live racing.

Racing begins on Friday and Saturday night at 7:15 p.m. with the opening post parades and on Sunday at 1:15 p.m.